Each of Giuseppe Bessero Belti's prototype Experimenta vases includes a cylindrical 3D-printed nylon container that mimics the form of a paraffin lamp base.

Filled with water, these bases are fixed to glass chimneys collected from vintage lamps, which hold the flowers. 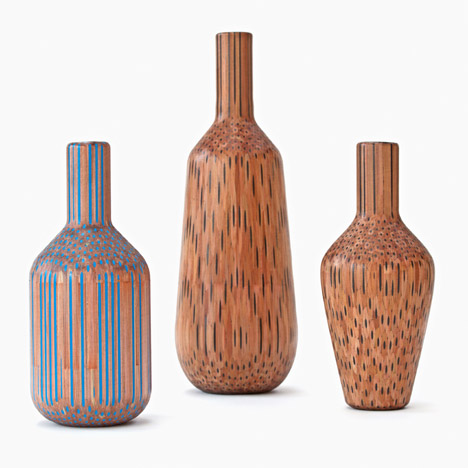 The shape of the chimneys in paraffin lamps varied enormously between the late 18th century and the second half of the 19th century, as designers responded to technological innovations and the introduction of new fuels.

"During the era in which the first oil lamps were conceived, the design was oriented as much as possible toward the mass market," Belti told Dezeen.

"Today we find ourselves in a different socio-cultural context and the aim is increasingly to create micro-markets to accommodate the need for uniqueness and the niches of new consumers."

"Old glass from fuel lamps acquires a second life, putting the 'standard' at the service of a unique piece where the flame turns into a flower, the fuel turns into water and the metal turns into nylon," he added.

The collection is currently at prototype stage while Belti finalises the definitive expression of his idea.

Photography is by the designer.