Royal College of Art graduate Offer Canfi has envisioned a future for cycling in which inductive bicycle lanes could be used to wirelessly charge electric bikes and other devices on the go. 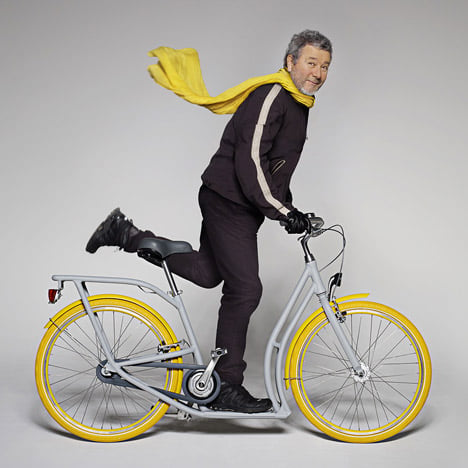 "This project is focused on resonant inductive bicycle lanes as a first step towards wireless power grids," said Canfi. "The road becoming an emitter that can power up electric bicycles, laptops and phones, making batteries redundant."

The current passing through these coils would transfer electricity wirelessly to similar copper elements on the bicycle mechanism via an oscillating magnetic field.

"The coils that are embedded into the screed turn on when the bicycle comes within range, using a radio-frequency identification (RFID) badge that recognises when the bike is near," Canfi told Dezeen.

This could replace batteries currently used to power electric bikes, and could also be used to charge electronic devices like mobile phones and laptops during journeys.

"Batteries are still the most expensive, polluting and heavy element of any electric vehicle and that is before you consider their short life cycle and problematic recycling procedures," said Canfi.

His alternative Capacitor 1.21 kit is designed to lock on to any diamond-frame bicycle to convert it into an electric model.

The capacitor stores energy without the chemicals found in batteries and the kit connects the series of copper coils to the bike's mechanism so the current can help power the ride.

Once the coils in the road and bike are paired other devices with coils embedded, like mobile phones, could feed off the electricity and use it to power up – similar to how wireless Qi chargers work.

"A fun fact about resonant induction power transfer is that once the primary and secondary coil are in a state of coupled magnetic field, this field itself becomes an emitter and secondary coils can connect to it as well," Canfi explained.

The additional parts are printed in nylon using selective laser sintering (SLS) to keep them as light as possible, as extra weight would require more power.

Canfi's capacitor adds less than two kilograms to the bike, but a lighter model would increase efficiency and lower costs.

He believes that recent developments in the creation of ultracapacitors, which store high amounts of electric charge, using miracle-material graphene have brought his idea closer to reality.

"Looking at the growing market for electric bicycles and the emergence of resonant induction as an efficient way to wirelessly transfer electric power, this project was about describing a truly possible future for urban commuting," Canfi said.

The project was presented at the Royal College of Art's annual degree show last month, along with a man-made biological leaf that could enable long-distance space travel and a proposal to create synthetic foods using nanotechnology.