Japanese studio K2YT has slotted courtyard gardens around the staircases and between the rooms of this four-storey house in Tokyo (+ slideshow).

Named House-K, the rectilinear residence was designed to accommodate two households. The rooms of each are interwoven amongst five secluded gardens, some of which take the form of open-air terraces, while others look more like sealed glass chambers.

According to Takuichiro Yamamoto, one of K2YT's two principals, the addition of these enclosed courtyards was a response to the site's location: on a corner plot with two street-facing elevations and also next to a railway that causes unwelcome noise and vibrations. 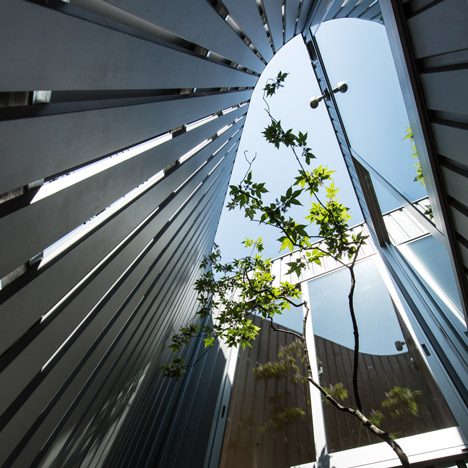 "For people seeking a detached house, it has always been a temptation to have a private garden to come with it," said the architect.

"Many attempts have been made to allow for a small piece of garden while extending the building coverage to the limit, but as a result, many have also ended up with curtains that are drawn all day long to shield the eyes from streets, which become too close to the windows," he explained.

"Thus, rows of unsociable houses become the standard city scene in the area."

To avoid this, K2YT positioned the various courtyards behind windows on different sides of the house, then created views across each one from at least two different rooms.

As the two street-facing elevations are oriented south and east, it wasn't difficult to allow enough natural light to permeate each of the four storeys.

"By incorporating the courtyard spaces into the house in the same manner as rooms, sufficient depths are provided from the streets, successfully shielding off views without use of curtains, even for the largest fenestration," said Yamamoto.

"The noise from the railway is also mitigated to the level that it is still audible but much less annoying," he added.

In plan, the house is organised around a simple grid of six rectangles that dictates the size of most of the rooms. This is complicated by a series of split levels, intended to suit "the required character" of each space.

The house was constructed from concrete, which has largely been left exposed throughout the interior. This is complemented by a selection of white walls, as well as wooden floors and ceilings.

Staircases are made from folded steel and are cantilevered from the walls, creating the illusion of weightlessness.

The houses' entrance is located on the southern elevation, alongside the entrance to a sunken parking garage. The external walls are rendered grey and dotted with square windows in three different sizes.

A four-storey-high stairwell forms the centre of the building and offers glimpses of the courtyards looming above.

A traditional Japanese-style room is located on this level, while kitchens can be found on the first and second floors. There are bedrooms on all three upper levels, with bathrooms on the first and third storeys.