Sascha Nordmeyer's HyperLip stretches the mouth apart to reveal the majority of the wearer's teeth and large portions of gum. 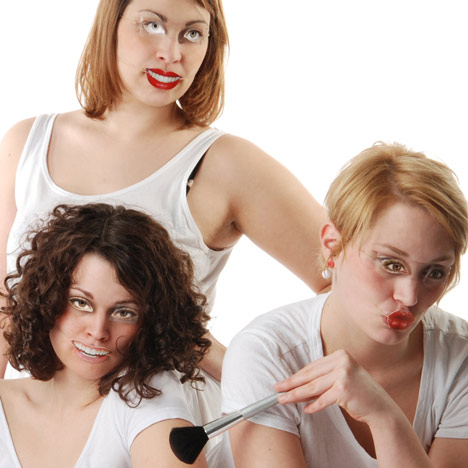 Too Beautiful To Be True by Meike Harde

"Conceived for people who are just looking for a bit of fun, the prosthesis is a rigid food-safe apparatus that forces a facial expression onto its wearer," said a statement from Los Angeles brand Artecnica, which has just put the HyperLip into production.

Similar to how a gum shield covers teeth, the prosthesis fits around the lips and pushes them outward – holding them in place to distort the lower part of the face.

The bright red-coloured plastic creates an exaggerated lip that completely surrounds the mouth.

Slightly narrower on one side than the other, the asymmetric shape can be worn either way around.

"HyperLip will enhance your communication skills, make you look smart in any circumstance, be a great conversation piece at a party, raise a few eyebrows and it will certainly gets you tons of attention," said Artecnica.

The HyperLip is set to feature as part of a travelling exhibition called Photography Playground, where visitors will be able to take part in photography sessions wearing the product.

Starting in Cologne from 11 September and running until 5 October to coincide with the Photokina imagery festival, the exhibition is also set to visit Amsterdam and Tokyo.

A prototype was also displayed in the Talk to Me exhibition at New York's Museum of Modern Art (MoMA) in 2011.

Other designs that modify the face include a set of prosthetic lips that can be inflated with a hand pump and a stylus that straps over the nose for using touch-screen phones in the bath.