News: a London restaurant has created a Champagne coupe from a mould of British model Kate Moss' breast.

To celebrate Kate Moss' 40th birthday and 25 years in the fashion industry, Mayfair's 34 Restaurant worked with British artist Jane McAdam Freud to create a mould from the model's left breast that was used to shape the bowl of the glass. 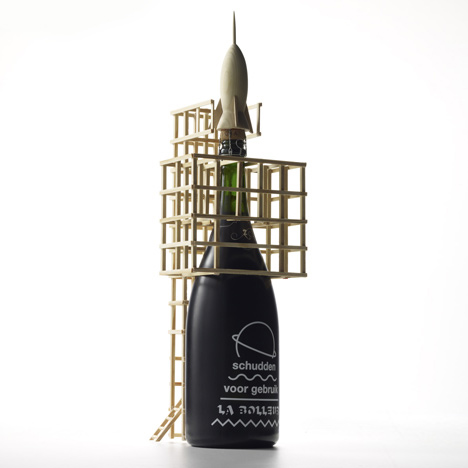 Zarb Champagne by THEY

The 34 Kate Moss Coupe features an elongated slender stem and a bowl decorated with an Art Deco-influenced geometric pattern. Moss' signature is engraved on the base.

Popular mythology surrounding the design of the first Champagne coupe – formally known as a Bol Sein – dates it back to the 18th century court of Versailles where it was supposedly shaped around the left breast of French queen Marie Antoinette, although historians suggest it actually pre-dates this period by 100 years.

"I was excited to participate in this project – what an honour to be alongside Marie Antoinette – she was a very intriguing and mischievous character," said Moss in a statement.

"Champagne is always associated with celebration and happy occasions and I had fun creating this beautiful coupe."

The coupe will be launched by Moss during a lunch at 34's Emin Room, where she celebrated her 40th birthday earlier this year.

Patrons who order Champagne at 34 and sister London establishments The Ivy, Daphne's, Scott's and The Club at The Ivy, will be able to drink from the glass from 9 October.