Japanese design collective Bril has filled a circular cedar frame with leaves that gradually fade from green to brown over the course of a year to create an annual clock without using hands or numbers (+ slideshow).

The Coniferous Clock references traditional sugidama, also known as asakebayashi: boughs of fresh cedar branches tied together, clipped into a sphere and hung up when sake – Japanese rice wine – was pressed following the rice harvest. 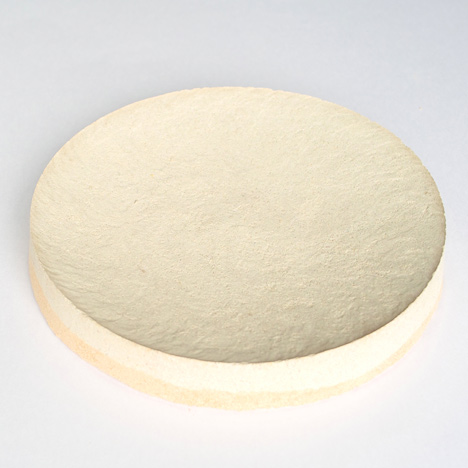 When the cedar leaves had dried and the sugidama had turned completely brown, it was a signal that the sake was ready to drink.

In a bid to create a product that tells the story of a specific tree and is made entirely of its materials, Bril has used the same concept to create a clock from coniferous leaves that brown slowly over 365 days.

"We could feel the seasons in our homes as if we were in forests. The bundle of sharp leaves create a fine-pixel picture that makes the gradation from green to brown more exquisite," Bril co-founder Fumiaki Goto told Dezeen.

In the absence of hands or numbers, a swinging pendulum gives the timepiece a more clock-like appearance.

The frame is lathed by local craftsmen who usually work with Japanese lacquerware. The leaves are attached by hooking them over small nails inside the frame.

At the end of the year, new leaves can be placed into the frame, mirroring the annual sugidama-making ritual.

Bril is a design collective founded by Tatsuro Kuroda, Jo Nakamura and Fumiaki Goto after they graduated from the Design Academy Eindhoven in 2011.

Previous projects by Bril include Rammed Earthenware plates made of tightly-packed soil and the Ceramic Lab set of containers made using a single mould.