The effect of Simon Heijdens' Shade installation is created using sheets of responsive film fixed to glass panels – a technique the London-based designer debuted at the Art Institute Chicago in 2010.

In the largest iteration of the project to date, the version at the Now Gallery takes the form of a seven-metre-tall, 20-metre-long glass curve around the edge of an exhibition space facing the street. 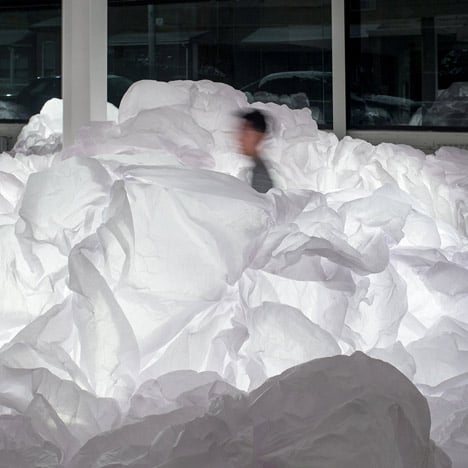 The film on the glass responds to fluctuations in the wind outside, changing the tessellated triangular sections from clear to opaque in ripples as gusts flow across the surface.

As the sun moves around the facade and varies in intensity, the patterns gradually shift around the interior. The inverse occurs at night, when the light inside is projected in patterns onto the pavement surrounding the exterior.

The gallery describes the work as: "A cellular glass facade that filters natural sunlight into a moving kaleidoscope of light and shadow directly choreographed by the elements passing outside, to restore an unplanned natural timeline to the interior of the new Now Gallery building."

Heijdens often uses natural elements to generate visual effects in his work, with previous creations including a series of hanging hand-blown glass vessels that turn data from wind movement into projected patterns of light by dying the water contained inside.

"Nature is becoming rare in our daily life," said Heijdens. "In the way our urbanising world is generally built and planned, our everyday surroundings have become perpetual and static through conditioned climates and 24 hour lighting."

"When unpredictable natural elements such as a lifting breeze, a sudden shower, or a setting sun are planned out of our surroundings, the timeline of the everyday is lost," he continued.

The installation will remain until 19 December at the Now Gallery, which opened earlier this year as part of the Greenwich Peninsula regeneration project.