More than 900 bamboo poles were used to construct this home, designed by architect Enrique Mora Alvarado for a site in a remote Ecuadorian rainforest (+ slideshow).

Casa Convento is situated on a plot surrounded by mountains, a small creek and a bamboo forest. 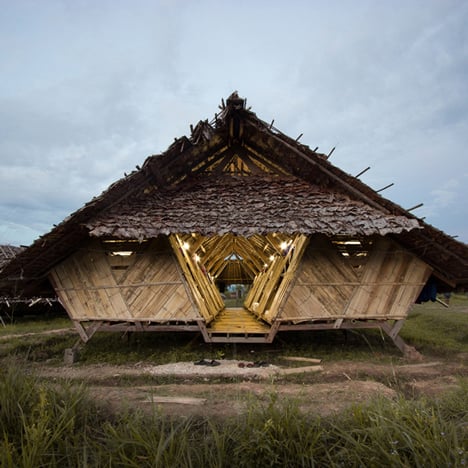 Recognising the importance of using local resources to reduce the cost of the project – and address the difficulty of moving materials in a location where roads are impassible in the wet season – Mora Alvarado developed a design that could be built using bamboo harvested from the site.

From his base in Ecuador's Santiago de Guayaquil, a city seven hours away from the village of Convento, the architect devised plans for a simple structure that could be easily explained during weekly or fortnightly meetings to the owners and local labourers who would be responsible for its construction.

"In the town there is an empirical knowledge of construction and some family members had built their own houses so there was a human capital that we could work with," Mora Alvarado told Dezeen.

"It was difficult to build the house without being there day-by-day to oversee the process," he added. "It was also really hard to work in a place where self-construction is the rule and the role of the architect doesn’t exist."

A key part of the project involved teaching the family the techniques required for bamboo construction as, despite the material's abundance in the area, the locals were not familiar with the curing process required to give it the necessary strength.

The farm on which the property is located provided the eight laurel trees and hundreds of bamboo stalks used for the framework and facades. The material was harvested by the family and local workers and was then cured on site.

The building's form borrows from traditional homes found in the region, with the floor raised above the ground to allow air to circulate underneath and reduce the risk of flooding.

Concrete foundations support a timber platform and columns made from multiple bamboo poles. The steel sheet roof is held up by bamboo trusses and lined underneath with bamboo matting.

An open terrace at the entrance divides the living, dining and kitchen area on one side from the three bedrooms and an additional corner terrace on the other.

The central communal space contains hammocks and a hanging garden. There is also a small garden situated next to the steps leading into the house.

The main cooking area projects out from the rear of the kitchen to stop smoke from filling the interior – a setup that is typical of houses in the region.

Wooden panels and bamboo screens of different densities respond to the amount of light and privacy required by the different spaces. Shutters along the edge of the terrace, the living area and the external walls of the bedrooms can be opened to provide views of the forest.

The use of wood and bamboo helped the project stay within its budget of just $15,000 (£9,500) and each of the processes used to gather material and erect the house was simplified so it can be repeated elsewhere in the village.

"Building with local resources in a bamboo producing area is a huge opportunity for the community because it awakens interest in harnessing local resources with local labour, causing a low impact on the environment and improving the quality of life of the inhabitants of the region," said Mora Alvarado.