Trees sprout out of the rainbow-coloured cubes that make up the facade of this bank in northern Tokyo – the fourth building that architect Emmanuelle Moureaux has designed for Sugamo Shinkin (+ slideshow).

Emmanuelle Moureaux, a French designer based in Tokyo, applied her signature colour spectrum to the facade of the Sugamo Shinkin Bank in Nakaaoki, but also developed a pixellated composition of walls, windows and planting boxes.

Her concept was to create a rhythmic facade that resonates with the busy nature of the site, located beside a traffic interchange where cars, buses, bicycles and pedestrians are regularly passing by. 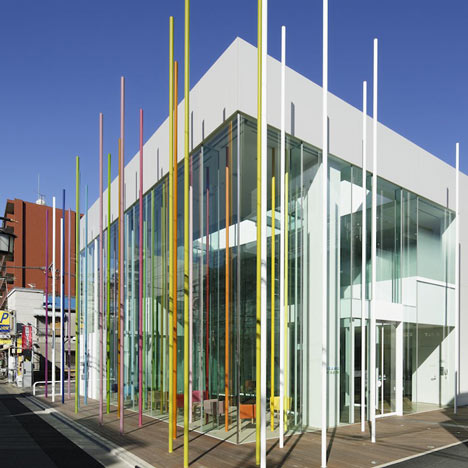 The result is a grid of projecting and recessed cubes – six up and 11 across.

Resin-based paint adds vivid colours to either the sides or fronts of some cubes, but never both. Moureaux thought this would make the building appear to "change expression" when viewed from different angles.

"Colours appear in and out from the rhythmical repetition of cubes, dancing like musical notes playing a rainbow melody," said the architect, whose work varies from architecture and interiors to product and furniture design.

"The melody spreads happiness and comfort to visitors and to the people in the local community," she added.

The cubes can be divided up into four different depths. The ones set back the furthest are infilled with windows, while the boxes that project outwards the most contain plants and trees.

According to Moureaux, species were chosen that will reflect the changing seasons, including marigolds, lavender and olive trees.

A glazed entrance welcomes customers into the store via an ATM vestibule. This area features a wooden floor, offering a transition between the wooden decking outside and the vinyl flooring inside.

A motif of coloured cubes runs along the sides of the walls, while customer seating comprises a series of cube-shaped chairs upholstered in fabrics selected to colour-match the facade.

A private finance area and cafe are located on the floor above.

Having previously fitted out one of Sugamo Shinkin Bank's existing branches, Moureaux's first building for the organisation was a branch in Tokiwadai, Tokyo, with windows that sit within brightly coloured recesses.

This was followed by two more branches – one featuring horizontal layers of colour and one fronted by colourful sticks.

Photography is by Daisuke Shima/Nacasa & Partners.