The Australian Institute of Architects has named "lyrical technologist" Peter Stutchbury as the 2015 recipient of the country's most prestigious architecture award (+ slideshow).

New South Wales architect Peter Stutchbury, whose most celebrated projects include the seaside Bay House near Sydney and the recently completed Invisible House in the Blue Mountains, was selected by a jury to win the 2015 Gold Medal.

The award acknowledges the work of his firm Peter Stutchbury Architecture, as well as his teaching and his role as a founding director of the Architecture Foundation Australia.

"In 34 years of practice, Stutchbury has mastered the art of creating architecture that speaks of the place it inhabits – buildings that are environmentally sustainable, culturally specific and locally embedded," said the jury.

Stutchbury graduated as an architect in 1978. His first major works include the PNG Church in Papua New Guinea and Israel House in Australia's Paradise Beach. 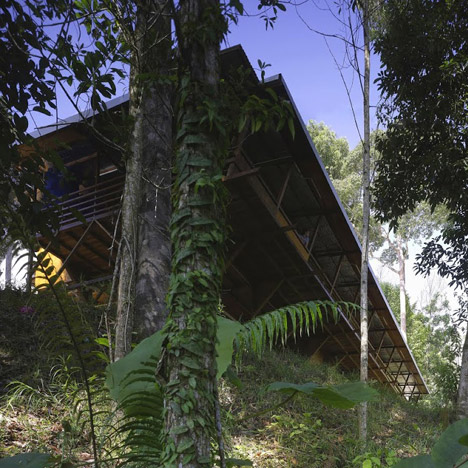 He later went on to work on the design faculty for the University of Newcastle, the archery centre at the Sydney Olympic Park, and a series of houses that include Springwater and Deepwater Woolshed, both in New South Wales.

"While the work of Peter Stutchbury Architecture is best known for its residential responses to unique Australian regional landscapes, Stutchbury's work is not limited to this genre," added the jury.

"The firm's awarded projects include public works in urban environments, and in recent years Stutchbury has successfully applied his meticulous, site-sensitive design approach in international locations as diverse as Japan, Vanuatu and Russia."

The Gold Medal is awarded by the Australian Institute of Architects in recognition of a significant contribution to national architecture. Previous recipients include Jørn Utzon, Glenn Murcutt and Peter Wilson.

It was presented today during a ceremony at the Ian Potter Centre in Melbourne.

Read a jury citation from architect and critic Kenneth Frampton:

As Stutchbury himself has made clear, there is no single point of departure for his architecture. One can only say that it derives its wide-ranging character from the enigmatic experience of the Australian continent in all its vastness.

Like Glenn Murcutt and Richard Leplastrier, the two Australian master architects with whom he is most closely associated and with whom he habitually teaches a studio course for advanced students every summer, Stutchbury builds the spirit of the outback into his work wherein the exotic flora and fauna of the continent, not to mention its geology, topography and climate, find a responsive echo in his architecture.

This architect, as agent provocateur, remains a man of the people, combining in one volatile persona both a leader and a collaborator. This is a figure who recognises and acknowledges on a daily basis that distinguished works of architecture are never created by a single individual after the myth of genius. On the contrary, he is perennially involved in fleeting collaborations between multiple talents and protagonists, from the essential structural and environmental engineers to small-scale, quasi-industrial manufacturers working away on the edge of things, along with those dedicated young architects refining a given piece at the last minute, in the early hours of the morning.

More architecture and design in Australia