A collection of old school buildings in Rye, East Sussex, has been converted into a cinema and arts centre with the addition of a shed-like extension (+ slideshow).

Local arts charity Fletcher in Rye asked Jonathan Dunn Architects to transform the Victorian school into a two-screen cinema in Rye, a town in the southern English county of East Sussex.

Fletcher in Rye – named after local Jacobean playwright John Fletcher, who is believed to have collaborated with William Shakespeare on several plays – purchased the site after plans for a housing scheme were overturned in favour of a project to promote film and the arts.

The result was a cinema called The Kino, which hosts live theatre events, ballet, opera and screenings of sporting events and films, while a large gallery at the back of the site was designed to hold art exhibitions.

"The site is in the heart of Rye's Citadel, a highly protected conservation area with very awkward site access," said the architects. "The design intention was to re-use as much of the existing building as possible and remove the remodelled 1950s elements and strategically using openings that had been formed previously."

The architects repaired the red brickwork and lattice-patterned roof tiles of the Grade II-listed buildings, which were used as a library until 2010, and added a series of timber-clad extensions to accommodate links between two auditoriums – one with a capacity for 100 and another for 50. 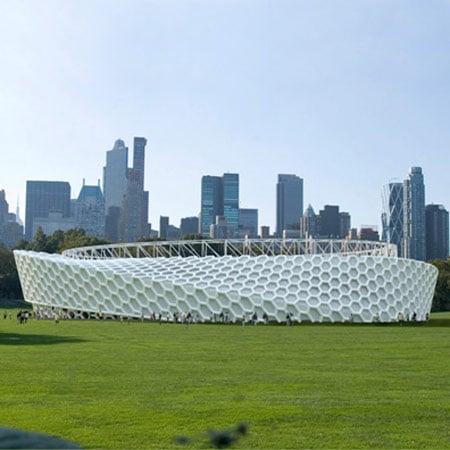 The extensions are uniformly clad in planks of red cedar wood to contrast with the intricate detailing of the Victorian buildings.

One auditorium features a sedum roof that is intended to reference the former garden it now occupies, and also act as an acoustic dampener to absorb sound leakage.

"The concept was to open up the views of the Rye roofscape and church tower to reference the context before the audience enter the auditoriums," explained the architects, who followed the roof line of the existing buildings to form the shape of the extensions.

"The roof form was also important as the church tower looks directly over the site and is the most visited point in the town," they added.

A shed-like structure with a pitched roof encloses a stairwell that leads to the projection room over the theatres. A corridor with a faceted roof skirts one side of a courtyard to provide a link between the two screens and the box office and cafe.

The ribbed oak cladding runs around the walls of the box office and cafe to conceal cabling and services, and was designed to represent the frames of an old film strip according to the architects.

This feature continues into the auditorium, where coloured downlighting is set below its edges to illuminate the access stairs to the terraced seating.

"The twelfth rib on the panelling is a wider strip to represent 12 frames per second based on the early silent movies and when the eye begins to read movement," the architects explained.

In the cafe, pendant lamps with wide industrial-style shades hang on chains over the tables. Overflow seating is located on a mezzanine floor above the entrance and box office.

Photography is by Oliver Perrott.