Finnish designer Iiro A Ahokas has created a tea set that fits neatly together inside an insulated cup shaped like a "bawdy" test tube.

The set – named Sigmund's Travelling T-Laboratory – comprises the insulated cup, a honey dipper, a tea strainer, an airtight tea container and measurer, and a container for sugar.

Each of the elements is sized and shaped so they fit inside the double-layered cup like a set of Russian dolls.

The vessels are made of hand-blown, heat-resistant, low-thermal-expansion borosilicate glass. The honey dipper has a gently ridged end, while the strainer is perforated to allow water to disperse the tea.

Cast stoneware is used to form the central compartment, and a silicone lid retains the heat and seals the set for travelling.

"The test-tube shape was the most natural choice for objects that are hand-blown out of different sized thin cylindrical borosilicate glass tubes," Ahokas told Dezeen.

"The streamlined, bawdy shape of the test tubes can be also interpreted erotically at the subconscious level, hence the name of the work which refers to the sexual vocabulary and the father of psychoanalysis, Sigmund Freud," he said. 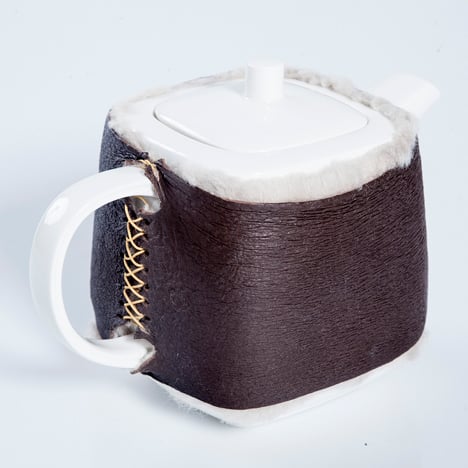 The tea set was created as a one-off conceptual prototype, but Ahokas believes that it wouldn't require any structural modification for serial production.

"Contrary to the Bauhaus ideology that was devoted to functionality, the inspiration behind Sigmund's Travelling T-laboratory was to create a purely conceptual object in the nature of an illusionary practical and mechanic, form-meets-function assemblage," he added.

The designer used 24-carat gold leaf to gild the stoneware tea container, both to contrast with the industrial materials that are sued to make the set and to complement the colour of the tea.

"The contrasting colours and materials, gilded cast stoneware and black silicone rubber, enrich the tea set visually and haptically, as well as emphasising the exclusive and fragile nature of the transparent hand-blown borosilicate glass," said Ahokas.

"The gold brings a luxurious warmth as 'the heart of the tea set' and is also very appealing in use combined with the colours of tea and brown rock candy sugar," he said.

Ahokas hopes to find a producer to create limited editions of Sigmund's Travelling T-Laboratory, which was on show at Iceland's annual DesignMarch festival earlier this year.