Norwegian studio Saunders Architecture has revealed designs for five of the 44 rural retreat homes being built across a vast landscape in the foothills of southern Alberta, Canada (+ slideshow).

Property developer Ian MacGregor is spearheading the Carraig Ridge project to build an array of architect-designed homes across an area of 650 acres (263 hectares) between the city of Calgary and Banff National Park.

Todd Saunders – a Canadian-born architect whose portfolio includes the artists' cabins on the remote Fogo Island and lookout points over Nordic fjords – is working on five of the houses, described by the firm as "unique modern retreats".

Saunders' designs are each named after a different letter of the alphabet, in reference to the shape of the floor plans.

The I House is the simplest of the five designs. It comprises a rectilinear building with an expansive glass frontage.

O House and T House are both designed to frame courtyards. The former will have a rectangular patio at its centre, and the latter will frame a triangular deck facing out to the south.

V House will actually be L-shaped in plan, dividing the building up into two wings, while the three-pronged Y House will have a living room at its centre, and bedrooms and a garage divided between wings.

"Every new house at Carraig Ridge will have a minimal environmental footprint, with design and construction working in harmony with the landscape to offer residents unspoilt and expansive views of one of the world's great wildernesses," said a statement from Saunders Architecture. 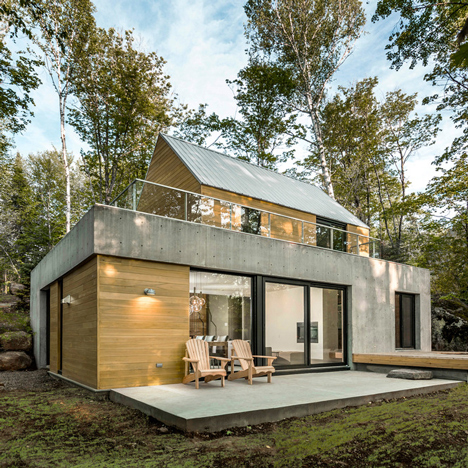 The Carraig Ridge houses will each occupy a lot of between one and five acres. The aim is to create a housing community where residents can enjoy the scenic woodland, lake and ridges, but without over-developing the wild landscape.

Residents will individually own their own homes, and will collectively own the remaining 500 acres (200 hectares) of parkland.

Developer Ian MacGregor sees the project as being more about preservation than development.

"I realised I had a chance to prove how to develop sensitive land really well," said MacGregor in a statement on the Carraig Ridge website. "I wanted something much better than I had ever seen before, a big area carefully planned with the world's best in architecture."

MacGregor's family has been based in the Banff area for over 60 years, and he has spent decades acquiring the land for this project.

"Carraig Ridge is what I see as responsible development of land that isn’t good for much except a wilderness park – but boy, what a park," he said.

"My approach to creating the Carraig Ridge community is based on my respect for this place and a love of great design," he continued.

"Build really well, build what's appropriate and contemporary with the help of some of the best designers in the world. Build for the future not for the past. Be careful not to spoil what is truly remarkable by building the wrong things, things that don't fit or are too big. Build just what you need and build it really carefully. That's my vision for Carraig Ridge."

The first completed Carraig Ridge homes are due in spring 2017. Young Projects has already built one structure there – a warming hut consisting of a fireplace set within a slatted wooden box.

Renderings are by Mir.