A headset that shows cyclists safer routes through the city in realtime and a projectable blind-spot visualisation for buses and lorries are among the speculative prototypes developed by a team from Future Cities Catapult (+ movie).

The five mock-ups for Connected Cyclists all envision possible futures for creating a "soft infrastructure" for cyclists – a layer of digital information that can help make city roads safer to navigate and help riders choose more intelligent routes.

"Yet as well as this — and clearly investment in such hard infrastructure is key — there is potential of a soft infrastructure which can be overlaid on existing urban fabric to further support cycling, which takes advantage of contemporary technologies such as wearables, Internet of Things, real-time sensor data, and so on."

The first two mock-ups are driven by a Google-glass style augmented reality visor that flips down from a standard cycle helmet to create a transparent screen in front of the cyclist's eyes.

Known as a Heads-Up Display, this kind of technology is already used on ski goggles to transmit information and push notifications. The Future Cities Catapault team believes this could be adapted to show contextual information on a cyclist's surroundings and offer simple route-finding help.

Another development of this would integrate icons and beacons into the display to help develop the "imageability" of places and moments along any given route. 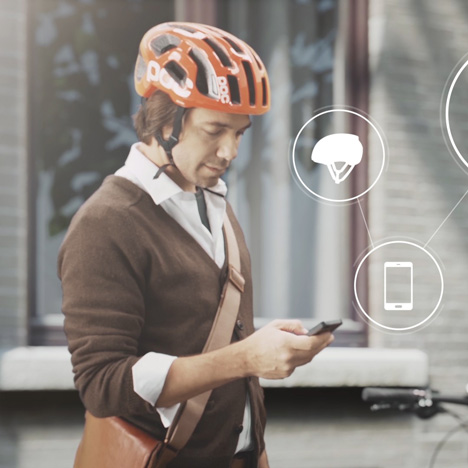 "Imageability is a term coined by groundbreaking urban planner/designer Kevin Lynch to describe the process by which we learn how to recognise and become familiar with our environmental surroundings and learn journeys," explained the team.

"On a bike, we particularly need cyclists to develop a heads-up stance, looking at the environment around them, rather than down at a phone. This prototype explores how technology might support a learning process based on imageability, such that the device and its interface essentially disappears over time, and the rider pays attention to the city around them."

A third proposal is a device that is mounted to the handle bars of a bicycle, gathering air-quality information and telling cyclists how polluted the streets ahead might be, offering alternative paths based on fewer exhaust fumes and other pollution factors.

The blind-spot visualisation prototype is an attempt to address one of the biggest causes of death for urban cyclists – particularly in London – by using a small side-mounted projector attached to the sides of HGVs, buses and other large vehicles.

The device would project an outline of the vehicles blind spot – the area at the side that is invisible to driver due to the angle of the wing mirrors and windows – so cyclists can avoid moving into the space.

"This kind of tech won't solve the problem singlehandedly — that may require more concerted efforts by regulators — but the blind-spot visualisation mock-up suggests different things that so-called 'machine-to-machine' tech could do. Small things that might help," said Hill.

The final prototype is designed for a bike-sharing scheme like London's cycle-hire, the Velib scheme in Paris or New York's Citi Bike. When booking their bike, users would program in their final destination and a small 3D-printed device on the handle bars could communicate left and right tuns with coloured dots and indicate when the rider has taken a wrong turn. The information would be based on GPS or data from the user's phone.

"It emerged from conversations with people in London, and our own observations and understanding of London – and in particular here, the opportunity to shift cycling to quieter 'backstreet' routes rather than the potentially dangerous heavily trafficked arteries," explained Hill.

"But many modern cities have that same issue," said Hill. "We suspect such approaches could work in most places. Again, they are best thought of as sitting alongside upgrades in the hard infrastructure – really redesigning the city with pedestrians and cyclists in mind."

Although none of the prototypes are working solutions, they use similar technology to the "3D soundscape" headset developed by Future Cities Catapult last year to make urban areas more navigable for blind people.

"We're trying to make tangible the promise of otherwise abstract ideas like 'Internet of Things' or 'smart cities' — to make it all real for people."

"We've tried to locate it in the everyday, to enable stakeholders like transport infrastructure providers or technology companies understand how they could work together to improve the 'user experience' of cycling."

The Connected Cyclists team, led by Claire Mookerjee and including researchers Rebecca Jones, Anastasia Vikhornova, and Christian Schmeer, has produced a movie to demonstrate how each of the designs might work. They hope that will encourage potential partners to get in touch to disucss developing the idea.

"'Design stories' allow you to try on a future for size, and to imagine how a prototype might fit into its urban context," said Mookerjee of the movie. "With prototypes to point at, critique and discuss we can begin to imagine other externalities or knock-on effects and build up both understanding and language to discuss what can otherwise be fairly abstract and technical ideas."