M-Arquitectos has upgraded a popular thermal bathing attraction on Portugal's São Miguel Island with a new timber-clad visitors' centre and a pair of stone-lined pools (+ slideshow).

M-Arquitectos was asked to renovate facilities at the Poça da Dona Beija natural spring on São Miguel Island – the largest of the nine main islands that make up the Azores archipelago in the North Atlantic Ocean.

The islands were formed by volcanic activity, and the heat from the lava underground generates a number of warm mineral-rich springs, which are thought to have healing properties for bathers.

The brief for the architects was to improve access to one of São Miguel's most popular springs. They added a walkway to connect a new visitors' centre to the bathing pools, and also increased its capacity by constructing two basalt pools and a foot bath.

Two existing structures, including an old ticket office, were cleared from the site to make way for the new visitors' centre. 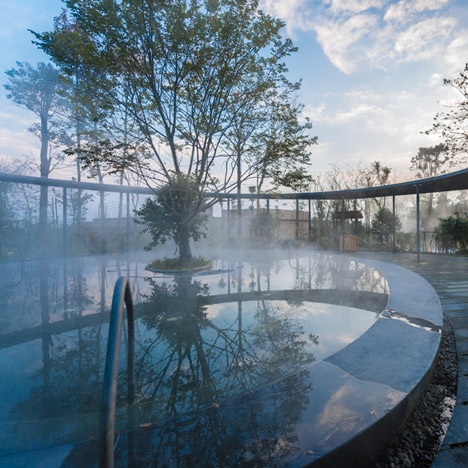 Constructed from Japanese cedar wood, this new building sits seven metres away from the edge of a river, marking the entrance to the site.

"Regenerating the existing site and creating new volumes had to be in total harmony with the environment," explained architects Fernando Monteiro, Marco Resendes and Miguel Sousa.

"Therefore, the paths, the two walkways and the wooden building are made of native wood," they told Dezeen.

"In terms of architectural shape the new construction seeks a balanced relationship with the surroundings," they added.

"To this end, we proposed a building based on a parallel sense to the existing south wall, and a sloped roof coated with cryptomeria – Japanese cedar – timber."

The building provides a new ticket office, toilets, storage space and a gift shop, as well as an angular porch that shelters part of a walkway to the pools.

The natural hot spring emerges within a cave on the site and passes into a series of pools positioned along the banks of a shallow river.

The two new pools were added on the north bank, connected to the existing pools on the south side by a wooden bridge. Steps lead down the cedar-clad bridge into the pools, which are set against steep and densely vegetated banks.

A constant flow of hot water is redirected from the spring to maintain the temperature of the pools, meaning water trickles over the edge of the basalt-lined baths into the adjacent river.

Floodlights nestled into the surrounding undergrowth and mounted on tall poles illuminate the pools and walkways at night.

The Azores islands sit above a triple junction between three of the world's biggest tectonic plates, and the last recorded volcanic eruption was in 1957. A number of Portuguese architects have designed private homes on the islands – including a house consisting of a jumble of curved and rectilinear volumes and a modern concrete house slotted behind the crumbling stone walls of a ruined building.

M-Arquitectos is based on São Miguel Island in the town of Ponta Delgada. The team also recently completed a house on the island, which features four small blocks fanning out from its facade.

Photography is by Paulo Goulart.