Swiss studio E2A infilled the facade of an old Zurich warehouse to create this rehearsal space for the city's opera house, before tacking a 60-metre-high apartment block onto one side (+ slideshow).

E2A was commissioned by Swiss developer Allreal Holding to create the performance space and apartments as part of a new masterplan for Zurich's Escher Wyss quarter, which overlooks the Limmat river.

The brief was to refurbish and extend a warehouse built in the early 1900s by Swiss company Escher Wyss, which started out as a textile spinning business before expanding to produce machinery for textiles, power turbines and ship steam engines.

The company was taken over by a Swiss engineering and manufacturing firm called Sulzer AG in the late 1960s. Since then several of its buildings have been repurposed as cultural venues, and this project becomes the latest.

The original facade comprises a mixture of pale beige and red bricks with arched window openings. 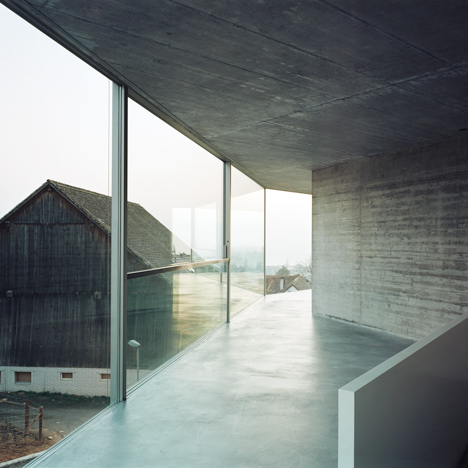 E2A used pale grey bricks to infill these openings and to extend the facade upwards.

"The new construction absorbs the existing, infusing it with a porous materiality," said E2A's Pia Simmendinger.

"Only the walls were kept of the original building, and the former windows are filled with the new, grey brick."

This building now houses two rehearsal stages and changing rooms for the Zurich opera house, as well as workshops for the production of stage sets.

The tapered tower – named Escher Terrace High-Rise Apartments – protrudes from one side of the old warehouse. It accommodates 50 apartments organised in eight-metre-high modules.

"By weaving the existing industrial elements with the residential tower, the building engages with an unusual urban situation, standing slightly offset from the street," Simmendinger told Dezeen.

The south side of the tower is chamfered, providing a sloping facade that integrates rows of glass-fronted balconies, which offer views over the city centre and Lake Zurich.

"The inclination of the tower reduces the existing depth of 25 metres and allows it to generate a terraced housing," added Simmendinger.

"The terraces have a south exposure and leave the noisy street in the north behind."