The OP-vase collection includes three differently sized inverted vases. Rather than holding bunches of flowers, Saltik's vases form an upside-down enclosure over a plate with a small tube-shaped container for a single stem or small posy.

Available in varying shades of green and blue, the glass vases have an arch-shaped cutout in one side that allows a plant or flower to be inserted.

The glass pieces have been hand-blown and cut in Istanbul, and each of the three sizes has its own unique pattern.

As the vases are turned, the individual concave cuts in the surface of the glass create an optical illusion reminiscent of a kaleidoscope. 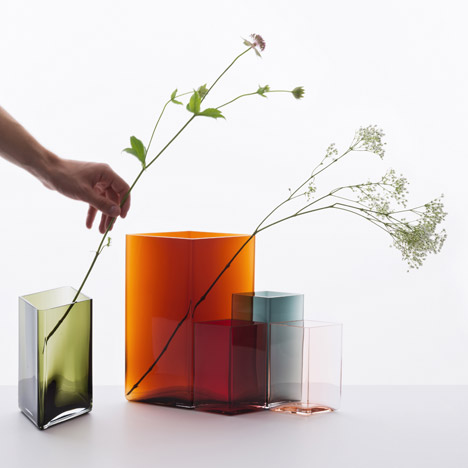 "The vases seek to create the impression of a bouquet with only a single flower through visual distortions," the designer said in a statement.

"The glass shield's kaleidoscopic properties have a magnifying effect, creating the impression of numerous abstracted flowers."

The collection is an evolution of Saltik's original OP-jects range, which included similarly dimpled glasses and bowls that created unusual visual effects when placed on patterned backgrounds. She has also created a wall lamp from textured panels that rotates to form moving light patterns across its surface. 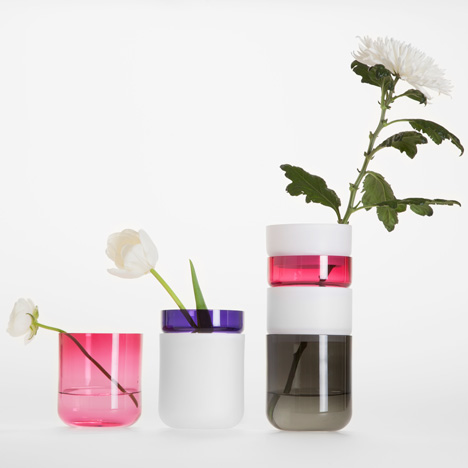 The new designs were first shown during this year's Milan design week in April, within the Ventura Lambrate district of the city, and will be displayed at designjunction during the London Design Festival later this month.

The designer completed a masters in Product Design at London's Royal College of Art in 2013, and has since focused on working closely with craftspeople to blend traditional techniques with new materials.

Saltik's Share.Food collection of tableware – which tips backwards and forwards to reveal flashes of fluorescent pink underneath – was a finalist in the 2014 New Design Britain Awards.