Supermodel Kate Moss has become the latest celebrity to launch a design career, creating interiors for a house that forms part of a "luxury second homes" development in the English countryside.

For her foray into interior design, Moss has teamed up with Yoo – the architecture and design company co-founded by property entrepreneur John Hitchcox and prolific French designer Philippe Starck.

According to Yoo, Moss has designed the interiors for The Barnhouse. The £2.5 million five-bedroom house is located in The Lakes – a development of Yoo holiday homes on a 263-hectare estate on a former quarry in the Cotswolds.

"John and I became friends through our love for the English countryside (and the pub)..." said the model. "When he told me about The Barnhouse in the middle of the silver birch wood I was intrigued and then excited to become part of the design team. We have created a luxurious haven in the woods, a perfect place to escape with family and friends."

The house features brick and wood cladding, extensive glazing, a gabled roof and a large raised deck with a private swimming pool. 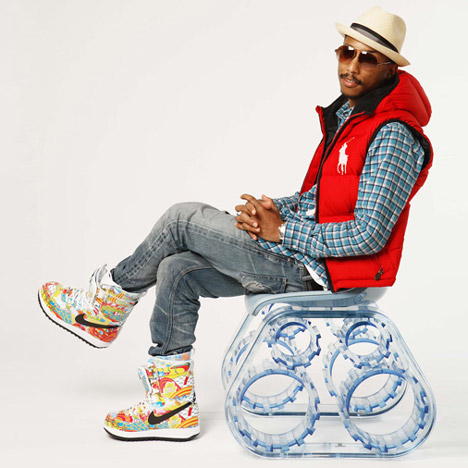 Inside, five bedrooms are arranged around a double-height living space, with an open-plan kitchen to one side. Among the highlights are the master bedroom, which features a thick grey plush carpet and a mirrored four-poster bed.

Other bedrooms are finished with wallpaper by London brand House of Hackney, based on Victorian designs by William Morris.

A large Wireflow light by Arik Levy hangs in the centre of the living space, where furnishings are upholstered in velvet-like fabrics.

"The kitchen is a prominent focal point featuring indigo blue cabinets with Crittall glass, and old-school brass cup handles, creating an intense and moody atmosphere central to the heart of the home," said a statement from Yoo.

"The kitchen also features a solid concrete island and slate countertop important for intimate family living. This striking twist on old-fashioned decor is extended into the living space with the use of prominent furnishings such as curved deep buttoned velvet Talisman sofas built on brass bases."

Bespoke furniture has been built by David Haddock, a local craftsman who built Moss' dressing room in London. The furnishings include a dining table with matching benches, the steel four-poster bed. A TV cabinet includes a silver thunderbolt, which is an homage to pop star David Bowie.

Moss has also chosen the artwork for the house, including pieces by Damien Hirst, Allen Jones and the model's collaborations with Dinos Chapman and Chris Allen. Yoo said the art helped create "a retro-glamour take on the traditional English home".

"Set in the heart of the Cotswolds, within its own secluded one-acre plot of private woodland, the new five-bedroom home is a retreat away from the bright lights of the city and catwalk scene," said the firm.

"The interiors have been carefully considered by Kate – a displaced glamour within the woods – creating a juxtaposition of traditional elegance and modern design."

Moss has previously designed fashion collections for British high-street retailer Topshop, and has also provided inspiration for a range of designers and artists. Last year, a new champagne glass was modelled on her left breast.

Yoo has worked with a number of celebrity interior designers including Jade Jagger and Kelly Hoppen. Other collaborators have included Marcel Wanders, co-founder of Dutch design brand Moooi.

More and more famous people are dipping their toes into design, with recent examples including musician Lenny Kravitz who unveiled a 1970s-inspired collection of interior products. Kanye West has collaborated on clothing with sports brand Adidas, as has fellow musician Pharrell, who has also designed a chair called The Tank and a fashion collection for G-Star made from ocean plastic. Will.i.am has created a smart cuff, eyewear and a range of objects made from recycled plastic.