Mid-century furniture pieces by designers including Warren Platner, Harry Bertoia and Arne Jacobsen are being reproduced as gold versions thanks to improvements in metal-coating technology (+ slideshow).

American manufacturer Knoll is introducing gold-plated versions of its Platner Collection, including chairs, tables, and stools. The company is also bringing out Bertoia's diamond chairs in the new metal finish, and the Danish company Fritz Hansen is currently selling a special edition of Arne Jacobsen's Series 7 chair with gilded legs.

All these iconic pieces were previously only available in nickel or chrome finishes. The process of gold-plating metal furniture has become less expensive for manufacturers and the quality is now more consistent, according to Knoll.

The company first began using the finish in 2012 for a sofa and ottoman line designed by Pierre Beucler and Jean Christophe Poggioli. "Through time, since the Platner Collection was released, the method of metal plating has not only become more advanced in terms of consistent coating, resolution, and durability, but it is also no longer cost prohibitive for retail," Katie Okamoto, a spokesperson for Knoll, told Dezeen. 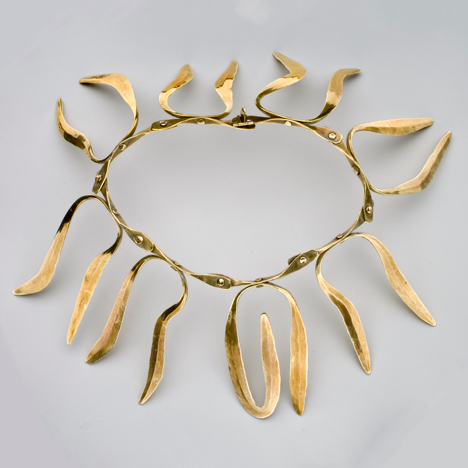 The designer Warren Platner originally intended his pieces to be finished in the warm-hued metal, but the Italian metal shop that produced the line could not work with the finish at that scale. His pieces, which were inspired by bundles of wheat, were therefore produced in nickel.

Platner often worked with brass and mirrored surfaces, such as in his interior for the Windows on the World – the restaurant and bar at the top of the North Tower of the former World Trade Center.

The company makes no such claim for Bertoia's diamond chair, which was first brought to market in 1952 in chrome and painted coatings. The introduction of the new version marks the designer's 100th birthday, not an expression of the designer's intention.

Fritz Hansen's pink Series 7 chair with gilded legs is also an anniversary reinterpretation. The 24-karat legs and pink seat limited edition marks the 60th anniversary of the chair's introduction and will only be available in 2015 (a chair with a blue seat and black legs was also launched as a more masculine counterpart).

Gold-plating is also being used by contemporary designers like David Adjaye, who used the finish on his Double Zero seating for Moroso, introduced earlier this year.