A grid of concrete encases this television transmission centre on the summit of San Cristóbal Hill in Santiago, Chile, which has recently been renovated by architecture studio Umwelt.

Working with a limited budget, Santiago-based Umwelt teamed up with architect Juan Manuel Sepúlveda to renovate and extend the transmission centre in the city's Parque Metropolitano.

By adding a second storey to house the television channel's digital equipment, the architects increased the facility's floor area up to 190 square metres. They then wrapped the entire volume in a new skin of perforated concrete.

Named Transmission Central, the building stands within park grounds on San Cristóbal Hill, whose summit is marked by a giant statue of the Virgin Mary.

The 300-metre-tall peak also provides a suitably elevated position for the city's telecommunication towers and antennas, while a group of small-scale buildings sheltering signal-processing machinery are distributed below.

"Located at the base of the antennae, on the top of Cerro San Cristobal, the transmission central holds a dual status as a piece entirely designated as telecommunications infrastructure and that of being being located in a public park," said the architects. 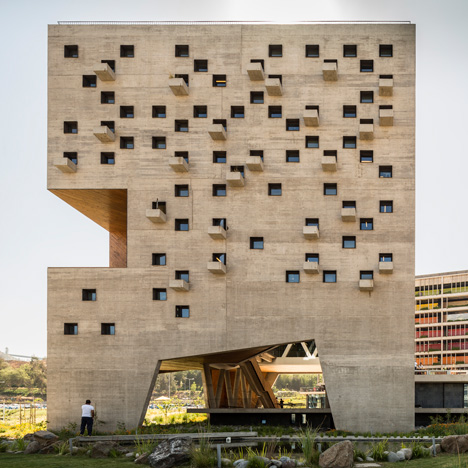 "The metropolitan park is an arm of the Andes mountains that inserts itself into the city, becoming the highest and one of the most central points of Santiago," they added.

"This condition makes it a strategic location for the installation of a number of telecommunications infrastructures resulting in 11 antennas along the profile of the peaks."

Most of the project's budget was reserved for the technical equipment and its hefty supporting structure, which was why the architects chose inexpensive precast concrete for the outer walls.

This type of panelling is more typically laid horizontally to create paved areas for parking and garden patios. The architects felt it would provide a reference to both the building's industrial use and its parkland location.

"The coexistence of such infrastructure, with the public and geographical condition of the hill, has led the authorities of the park to seek in the new projects a relationship between architectural image and technical functionality," said the architects.

The perforations help to give the give the building an "ambiguous scale" and meld the old and new structures together.

A pair of large black doors punctuate the side of the building, below a large dish, and are used to raise and lower the equipment for maintenance.

"The skin of concrete blocks creates a recognisable volume that absorbs the new and old architecture, while giving necessary security to the machines, ventilating generators and climatic equipment and closing hemetic spaces for fragile digital machinery," said the architects.

Umwelt was founded by Chilean architects Ignacio Garcia Partarrieu and Arturo Scheidegger in 2011. The studio has also created a steel-framed pavilion for the city in response to a brief for the Young Architects Program (YAP).

Nearby, on the campus of the Universidad Católica de Chile, Chilean architect Alejandro Aravena – director of the 2016 Venice Architecture Biennale – and his firm Elemental designed the monolithic concrete Innovation Center UC.

Photography is by Felipe Fontecilla.