Clad in mirrored glass, the Sogetsu Kaikan building was designed by influential 20th century Japanese architect Kenzo Tange in 1977, replacing a smaller arts centre he had built on the same site. The architect's own offices were housed on the 10th floor.

"It is primarily characterized by its half-mirrored curtain wall exterior, reflecting the greenery from the Akasaka Estate opposite, and its planar construction, allowing for a clear and unobstructed view by diagonally cutting through its L-shaped lines of flow," explained Nendo.

Tange, described by Nendo as "one of the pioneers of modern Japanese architecture", died in 2005. He was awarded the Pritzker Prize in 1987 for his work, including the Tokyo 1964 Olympic stadium, which combined Modernism and traditional Japanese design.

Nendo's design replicates elements of the exterior of the arts centre with its office interiors, which feature mirrored panels and doors.

"We have sought to come up with a design inspired by the exterior aesthetics, rather than a design based on interior functionality so often seen in office buildings," said the studio, which has also designed interiors for fashion brand Theory and footwear company Camper. 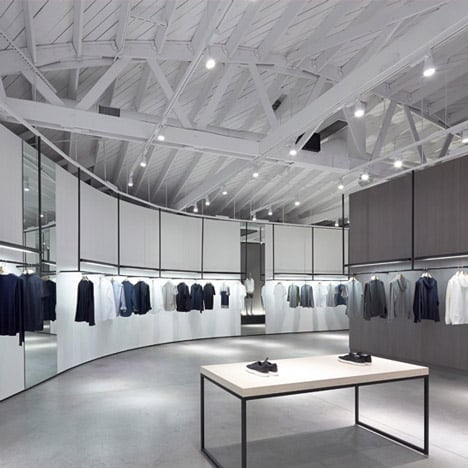 Nendo's store interiors for Theory are modelled on road systems

"We experimented widely with a variety of IR [infra red] reflecting and paints in order to precisely recreate the colouring of the original half-mirrored exterior and sashes," the studio commented.

"In order to accentuate the reflection of the half-mirror, the flooring material has been fitted symmetrically in relation to the curtain wall," it added. "The result is an interior design that allows one to get a strong sense of the character and form of the building as a whole."

The studio also updated a cafe situated on the second floor of the building, which still featured interiors designed by Tange in the 1970s.

The studio preserved the original walls and ceilings and restored the existing Eero Saarinen tulip chairs and tables.

Tabletops have been covered with similar reflective material to the mirrored ceiling, and a newly fitted floor extends up and onto the sides of glossy black counters.

Nendo borrowed and stretched the n from the its own logo to form a c-shaped symbol for the cafe.

Tableware also features warped elements, such as the handles of mugs. Coffee stirrers have been made from tin so that their shape will gradually change as they are used.

In an interview during Milan's design week, Nendo founder Oki Sato told Dezeen that his prolific product- and interior-design studio was handling almost 400 projects at a time. Its recent releases include house slippers shaped like wizard's hats, expandable shelves, and a bag for carrying architects' drawings.