A team of Illinois-based scientists have developed a form of "Martian concrete" that could be used to build architectural structures on the surface of the red planet.

Lin Wan, Roman Wendner and Gianluca Cusatis from Northwestern University have formulated a construction material that combines Martian soil with molten sulphur, which they claim could be used to build an entire village on Mars.

The most important feature of the material is that – unlike regular concrete – it is produced without water, which is in scarce supply on Mars. The majority of water that exists on the planet today is frozen.

Another advantage of the material is that it it entirely recyclable, so it could be melted down and reset into a new form. It also has a natural resistance to acid and salt, and can endure very low temperatures.

"Due to the dry environment on Mars, sulphur concrete concept is a superior choice for building a human village on the red planet," reads the team's report.

"Moreover, the the atmospheric pressure as well as temperature range are highly suitable for the application of sulphur concrete."

There has been a growing interest in Mars colonisation since NASA's robotic Curiosity rover landed on the planet in 2012.

In 2013, over 200,000 people applied for a one-way ticket to join a Mars settlement, and last year NASA ran a competition to find proposals for 3D-printed housing on the red planet. Even architecture studio Foster + Partners has been investigating the possibilities for building on the planet.

Most of these proposals include plans to use the planet's surface composition as a construction material. But the way the elements of the soil could be turned into a feasible building material has not been presented until this report.

According to Wan's team, researchers and engineers have been experimenting with using sulphur as a bonding agent in aggregates for at least a century.

However, there are numerous problems with it. For instance, sulphur can shrink in low temperatures, weakening the overall strength and durability of any material made from it. It can also turn directly from a solid into a gas when placed in a vacuum.

To overcome these issues, the team produced concrete using different percentages of molten sulphur, then carried out a series of tests to determine both the strengths and failures of the blends. Experiments included three-point bending and unconfined compression. 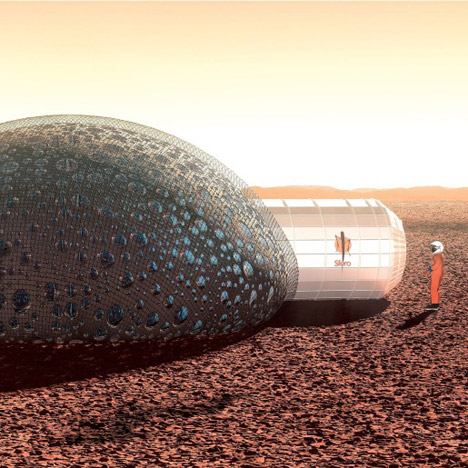 They found that an even mix of sulphur and aggregate produced a material with a strength of 50 megapascals, which equates to three times as much on Mars due to the difference in gravity. This, they say, makes it feasible for construction on Mars.

"The best mix for producing Martian concrete is 50 per cent sulphur and 50 per cent Martian soil with maximum aggregate size of one millimetre," reads the report.