Buenos Aires studio Adamo-Faiden has refurbished a local 1970s townhouse and constructed a huge glazed enclosure at the back.

The glass structure is one of three updates the architects made to the house, which is located in a rare low-density area of the city's Belgrano neighbourhood.

It is joined by an angled plant-filled screen made from perforated and white-painted metal at the front of the house, and a new living area in the basement.

White metal framework gives the rear extension, which overlooks a pool in the rear garden, a cage-like appearance.

The project, named Fernández House after the client, shares this characteristic with two previous projects by the firm: a home with an angled terrace in the nearby Villa Adelina neighbourhood and a mixed-use block with a gridded facade and recessed balconies in Núñez.

"A light pavilion creates a habitable double-facade system that extends the back limits of the house," explained the architects, "mediating between exterior and all the interior instances of it." 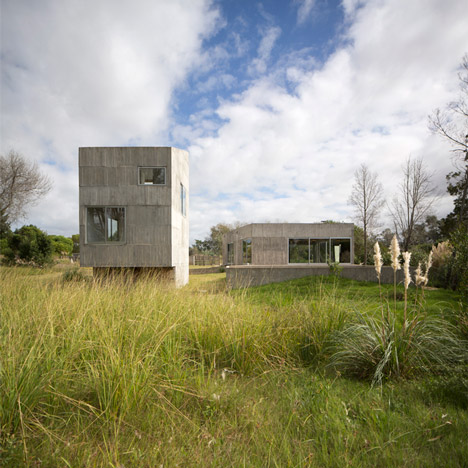 The triple-storey glass enclosure provides a buffer space to help insulate the house in winter, while windows hinge out from its walls to ventilate the space in summer.

"I like to think that the main material we used for this project was the air itself, the pavilion acts as a winter garden and a gallery in the summer season," Faiden told Dezeen. "At the same time it activates the air circulation in the whole house, including those areas we didn't touch."

The glazing extends down to enclose the basement, which has been converted into an additional living space connected by a gravelled patio with tall plants.

A glass door leads out of this sheltered area to a sunken part of the garden, and up to ground-floor level where the swimming pool is located. The structure's white frame helps the painted brickwork of the original house.

"The garden was too small for so many children (and their friends), and at the same time the basement of the house was obsolete because it has a lot of service rooms they wouldn't use and huge technical machinery that was completely out of date," said Faiden.

"We tried to unify the basement with the garden by suppressing part of it and by adding a light pavilion."

A matching white metal gate in front of the property screens a small yard between the facade and street.

The Buenos Aires studio founded by Sebastián Adamo and Marcelo Faiden previously added a plant-screened pavilion to the vacant roof of a 15-storey block in Buenos Aires. It also completed the first stage of a concrete development near the Uruguay fishing village of José Ignacio last year.