Bjarke Ingels' firm has unveiled its design for a police station in New York that will consist of intersecting blocks clad in concrete, metal and glass.

Revealed today, the 45,000 square feet (4,180 square metres) station is designed by BIG for the New York City Police Department's 40th precinct. It will be located in the Melrose neighbourhood of the Bronx, one of the city's five boroughs.

"The new 40th Precinct Station will be an iconic building for the surrounding neighbourhood, serving the various needs of the New York Police Department while strengthening the department's commitment to community policing," said BIG, which has offices in Copenhagen and New York.

The building will be composed of stacked concrete blocks – a composition that meets various requirements outlined in the project brief. The blocks, which BIG refers to as "bricks," also take their cue from the rusticated bases of early police stations in the city.

The design is meant to convey accessibility and public service. "Rather than evoke the notion of fortification, the bricks of the 40th Street Precinct Station reference the various police and community functions that the building serves," said the firm. 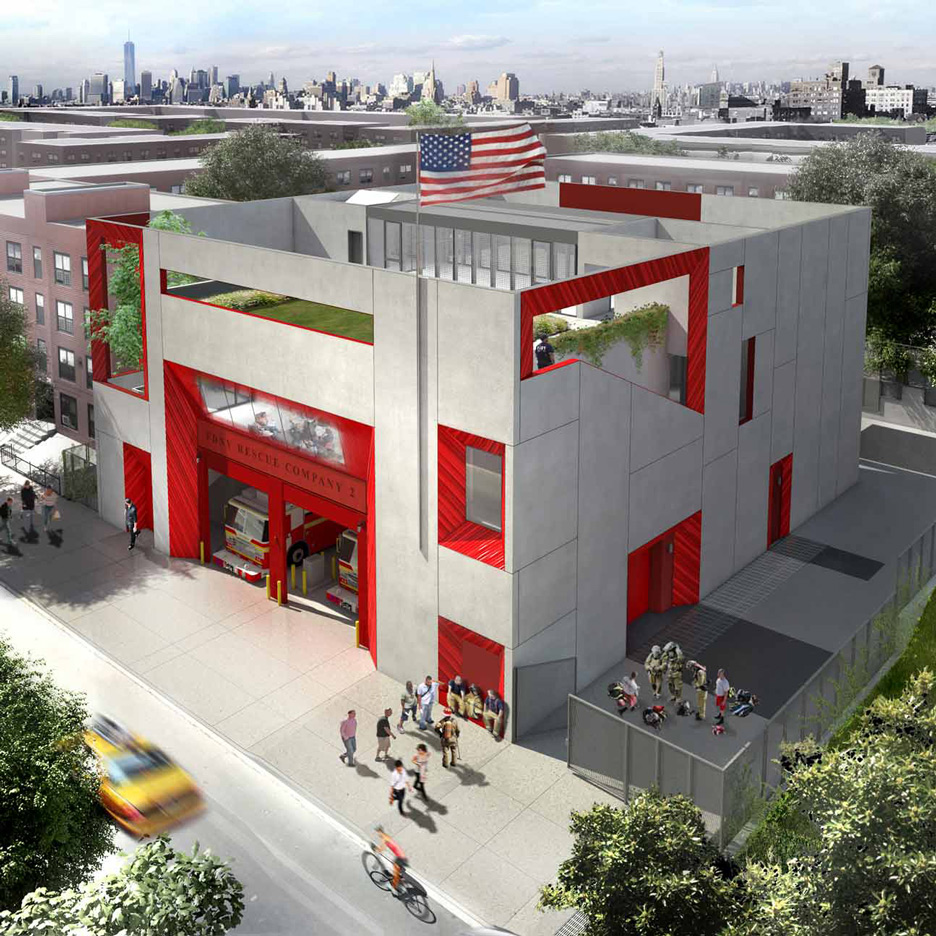 The blocks are organised around a central atrium, with each rectilinear volume containing a distinct programmatic element.

"Internally, this provides individual spaces for the precinct's groups, forming an urban plan at the scale of a building," said the firm.

The vertical stacking will also enables "visual connections" within the compact building.

The intersecting blocks form a number of setbacks that emphasise entrances, create clearances between the station and neighbouring buildings, and accommodate mechanical and zoning requirements. The setbacks also enabled the design team to incorporate windows into the exterior facade that are not visible from the street, increasing privacy and security.

Windows will be surrounded by angled, tapered panels that reinforce the notion of "pushing in" that is conveyed by the setbacks. On the upper levels, clerestories will bring natural light into the building's core.

The station's perimeter walls will be made of sandblasted, precast concrete panels, while the walls surrounding setbacks will consist of polished concrete and reflective materials. Areas of the building that house mechanical equipment will be clad in perforated metal, which will conceal equipment while enabling airflow.

Inside, the design is intended to "encourage dialogue with the community while providing spaces for officers to reduce stress and promote physical activity". One such feature is an exercise courtyard with training areas and a climbing wall.

The building will contain a community meeting room – a first for a New York City police station. The public space will have its own street-level entrance and will contain information kiosks and areas to hold classes and events.

"A separately accessible community room will be the first of its kind in the city," the firm said. "At the street-facing facade, small circular perforations in the concrete panels call attention to the special functions of this particular programmatic block, allowing for transparency that is essential to the NYPD's plans for this new kind of space."

The brief called for a number of sustainable features, including the use of non-reflective materials to optimise the building's energy performance. The stacked blocks will also have green roofs, each featuring sedum plants that are visible from internal offices.

Other recent civic projects in New York include a proposed fire station in Brooklyn designed by Studio Gang and a new sanitation department complex in Manhattan designed by WXY and Dattner.

BIG has unveiled a series of US projects since opening its New York office in 2010. Current projects include the Two World Trade Center skyscraper in Manhattan and the new Google headquarters in Mountain View, California, which it is designing with Thomas Heatherwick.