BAMPFA, as the cultural institutions are collectively called, is run by the Berkeley branch of the University of California.

Renowned photographer Iwan Baan has captured images of the new $112 million (£83 million) facility, which opened to the public on Saturday.

The complex was designed by the architecture studio DS+R, known for high-profile projects such as The Broad museum in Los Angeles and New York's High Line. The firm is also on a shortlist to design the new Obama Presidential Library in Chicago.

"The new home of the UC Berkeley Art Museum and Pacific Film Archive wants to be a mind-bending twist of the old and the new, preservation and provocation, a stylized whale of shimmering steel that drapes a stocky neighbor from 1939," King wrote.

"In fact it's something better: a well-crafted, multilayered museum that manages to feel intimate and expansive at once."

Encompassing 83,000 square feet (7,710 square metres), the complex is located in downtown Berkeley, directly across from the school campus. Its program includes exhibition space, theatres, and a library for film and art.

DS+R repurposed the printing plant, which consist of a single-storey structure with a distinctive sawtooth roof and an adjoining, three-storey rectangular bar. 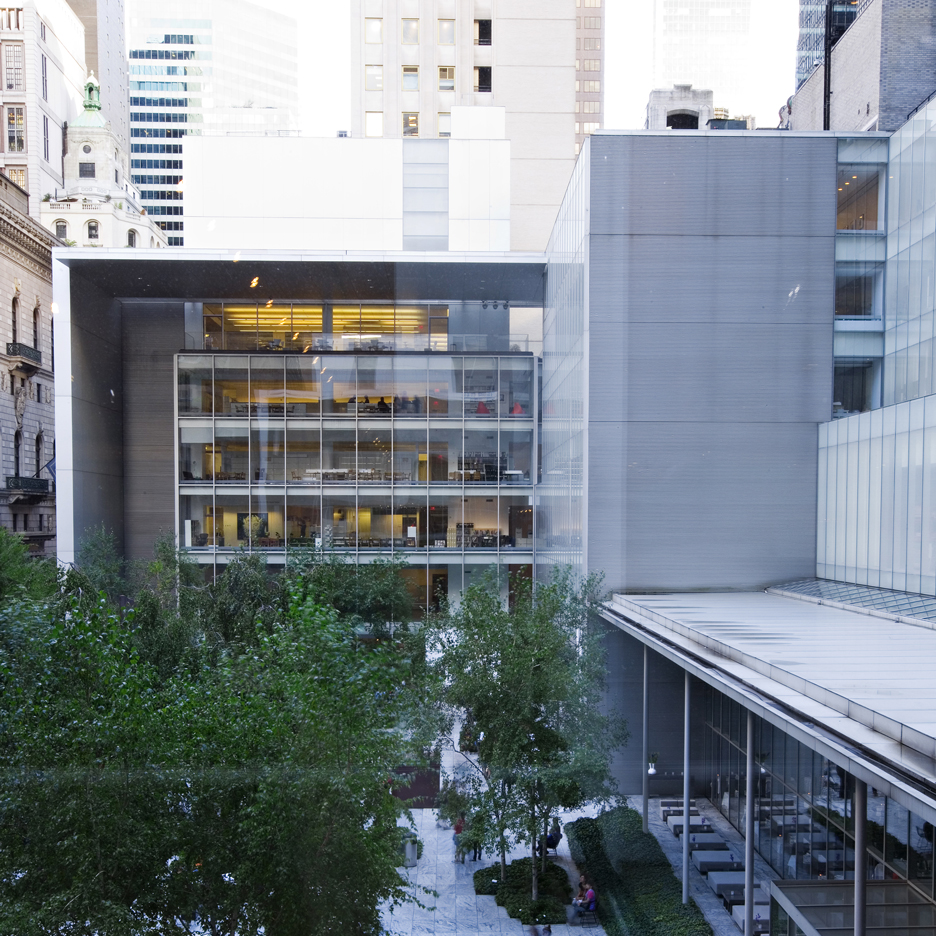 The firm also designed a metal-clad volume for the property that total 35,000 square feet (3,250 square metres) and houses a large theatre.

The metal cladding extends over the original factory to form a small wedge-shaped volume that cantilevers over the street.

"The supple body of the new structure, draped between the original 1930s orthogonal buildings and snagged on their sharp corners, creates a dramatic public spine that begins as a cantilevered cafe marking the building's entrance, and culminates in an indoor theatre on the other end of the site," said Charles Renfro in a statement last month.

Outside the building, a 31-by-17-foot (nine-by-five-metre) LED screen overlooks a public plaza and is intended to be used for film screenings.

For more than four decades, BAMPFA was housed in a Brutalist building by San Francisco architect Mario Ciampi. The building was closed years ago due to seismic concerns.

Japanese architect Toyo Ito was originally commissioned to design a new home for the institution, but his proposal was cancelled in 2008 due to budgetary constraints. DS+R was hired in 2010.

"The new BAMPFA will be the architectural and cultural centerpiece of downtown Berkeley," Rinder said in a statement.

"Combining serene spaces for viewing film and art with dynamic public areas, the building will inspire audiences for generations with its fresh, imaginative design and versatility."

Other recent cultural projects in the US include a proposed art and model train museum in Massachusetts by Gluckman Tang and a recently completed automotive museum in Los Angeles by Kohn Pederson Fox.