Fungal flowers coated in metal and a sofa upholstered with fake grass are among the pieces in a solo show of work by Japanese botanical artist Makoto Azuma in New York (+ slideshow).

The exhibition at Manhattan's Chamber gallery showcases new sculptures alongside older pieces by the Tokyo-based artist, whose work has been described as a fusion of art and science.

Azuma is known for creating expressive sculptures and installations using flowers and plants.

"No other artist has made us so radically reconsider the power of flowers, plants and ultimately nature, in such an insightful and seductive way," said Juan Garcia Mosqueda, who founded the Chamber gallery in 2014.

"We're thrilled to be able to expose the spectra of his work in a gallery in New York for the first time."

The artist said his work follows a long tradition of man "depicting his relationship to nature". 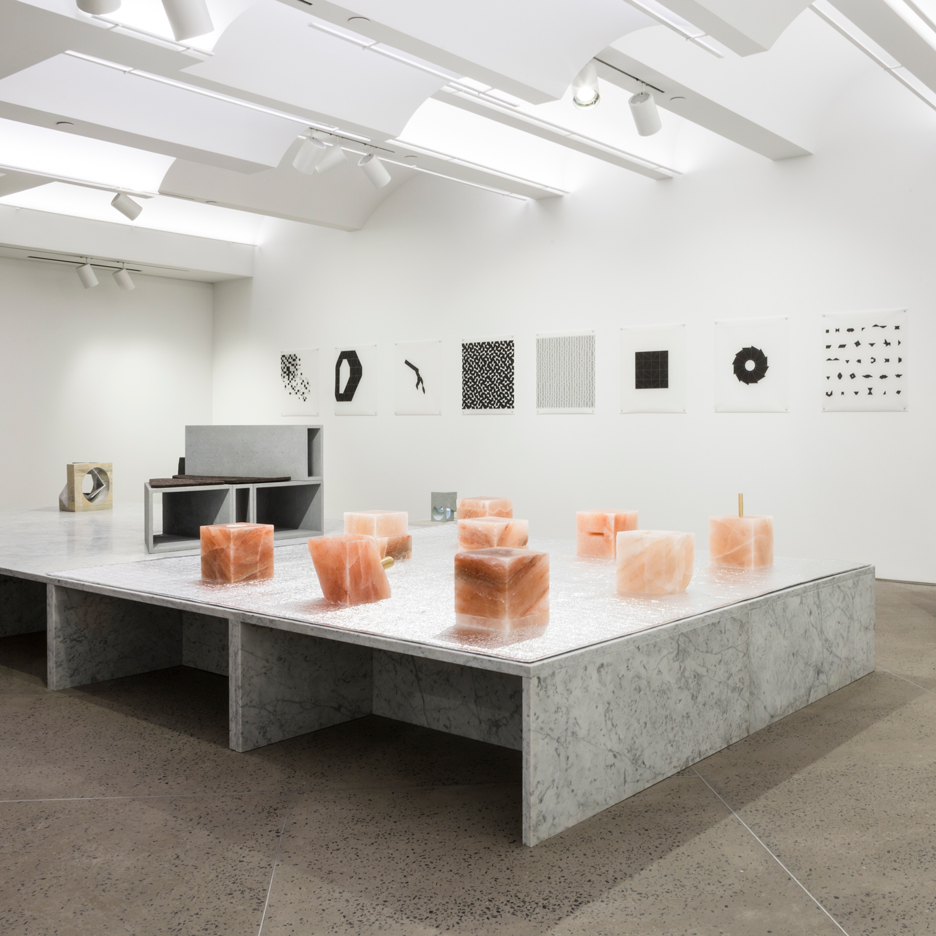 "His position within the natural world is like a mirror reflecting the era," said Azuma.

"The pieces in this collection speak to the theme of Human|Nature, and reflect a series of manmade interventions in materials, forms and principles from the natural world."

For the New York show, he has debuted his new Polypore sculptures, which are made of mushroom-like growths extracted from tree trunks and then coated in metal.

The artist collected the fungi from different areas of Japan.

Six Polypore sculptures are featured in the show, two of which are still connected to a tree trunk.

"With his Polypore series, Makoto introduces a new language of permanence to his work, combining gold, platinum and copper with polypores – shelf-like fungi that grow on old tree trunks," the gallery explained.

"In the polypore, Makoto has found a raw material that thrives on the decomposition of nature, yet when removed from its natural habitat, is hardened like wood."

The Chamber show also marks the debut of two pieces in the artist's Shiki 1 collection, which consists of small pine trees suspended by wire within steel frames.

The series is "part of the artist's ongoing exploration of the essence of the pine tree through experimental ikebana", the gallery said, referring to the Japanese art of flower arranging.

The show also features photographs of Shiki sculptures floating in space, a project called Exobiotanica that was staged in 2014.

The artist teamed up with the California-based company JP Aerospace to launch two of the sculptures into the stratosphere and then photograph them.

One sculpture consisted of a Japanese white pine bonsai, and the other contained an arrangement of flowers such as orchids, hydrangeas and lilies.

The sculptures were launched from a site in Nevada using helium balloons and floated in space for several hours.

A sofa, table and bicycle from the artist's Botanical series, which consists of objects covered in AstroTurf, are also featured in the Chamber exhibition.

"Fictional moss camouflaged as everyday objects playfully enables the semblance of nature to infiltrate our lives," said the gallery.

Pieces from Azuma's Crystal Seedcases collection, unveiled in 2006, are also on view.

The glass containers are shaped like an amaryllis, a sunflower, a soybean and an avocado, and each contains a seed or group of seeds.

"For Makoto, these repositories are meant as life-saving first aid kits with which we will regenerate food-stuffs and plant life in a post-apocalyptic world," the gallery said.

This is the fifth capsule show offered at Chamber. It was curated by artist Andrew Zuckerman as part of his year-long exploration for the gallery into the intersections between human and nature.

Prior shows at Chamber include Unpacking the Cube, which featured sculptures by Steven Holl, Leong Leong and Levenbetts, and This is Not a Duet, which presented work by Sung Jang and Gala Fernandez Montero.