Spanish designer Ion Lucin has created a concept for a minimal bicycle with a slender frame, three-spoke wheels and brightly coloured highlights (+ slideshow).

The Baik's orange accents are partially hidden on the inside edges of the matte black frame, and are only visible from certain angles. The wheels each feature three spokes and are designed with ultra-thin tyres in mind.

"The idea was to create a bicycle design with as few elements and lines as possible," said Lucin. "With the help of symmetrical lines and angles it was possible to create a frame which would blend with the rims of the bicycle in the same angle, thus even further eliminating the lines that were present."

The bike is a fixed-gear model, and features horizontal handlebars with minimal details. The concept design also includes plans for a satchel-style bag, which can be attached to the frame. 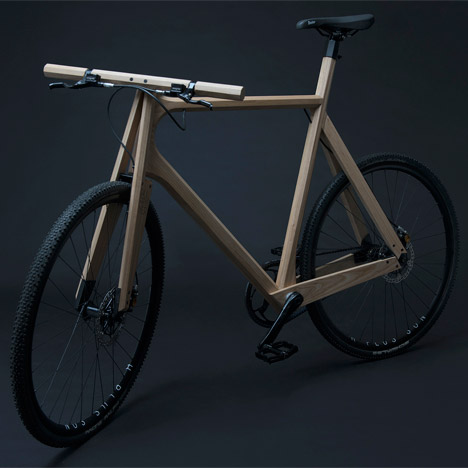 The bag features a fold-over opening with two fastenings, and a slanted front section that allows it to be aligned with the bike's downtube.

Lucin has designed concepts for further accessories that could accompany the bike, including a wallet, sunglasses and a watch – all decorated with the signature orange detailing.

He also created a bespoke three-dimensional typeface for Baik, which includes purposefully incomplete numbers and letterforms and has been used for the bike's orange-accented logo.

Others have created solutions for city riders, such as a folding bike that weighs less than a watermelon and a compact electric bike with wheels that are just 13 centimetres in diameter.