The Alfi armchair joins Morrison's counter stools, bar stools and a three-seater bench in the Alfi collection. All of the seats have wooden legs and a shell made from polypropylene.

Unlike the rest of the collection, the Alfi armchair's wooden legs extend above the seat to support armrests that match the colour and material of the shell.

"The Emeco wood-filled reclaimed polypropylene seat combines beautifully with the ash wooden leg structures, providing a rich play of materials and finishes," Morrison told Dezeen last year. "It's one of the most comfortable chairs I have designed."

The seat shells are made from reclaimed post-industrial waste – using 92.5 per cent polypropylene combined with 7.5 per cent wood fibre – and the frame is created by Amish craftsmen using responsibly harvested ash wood. 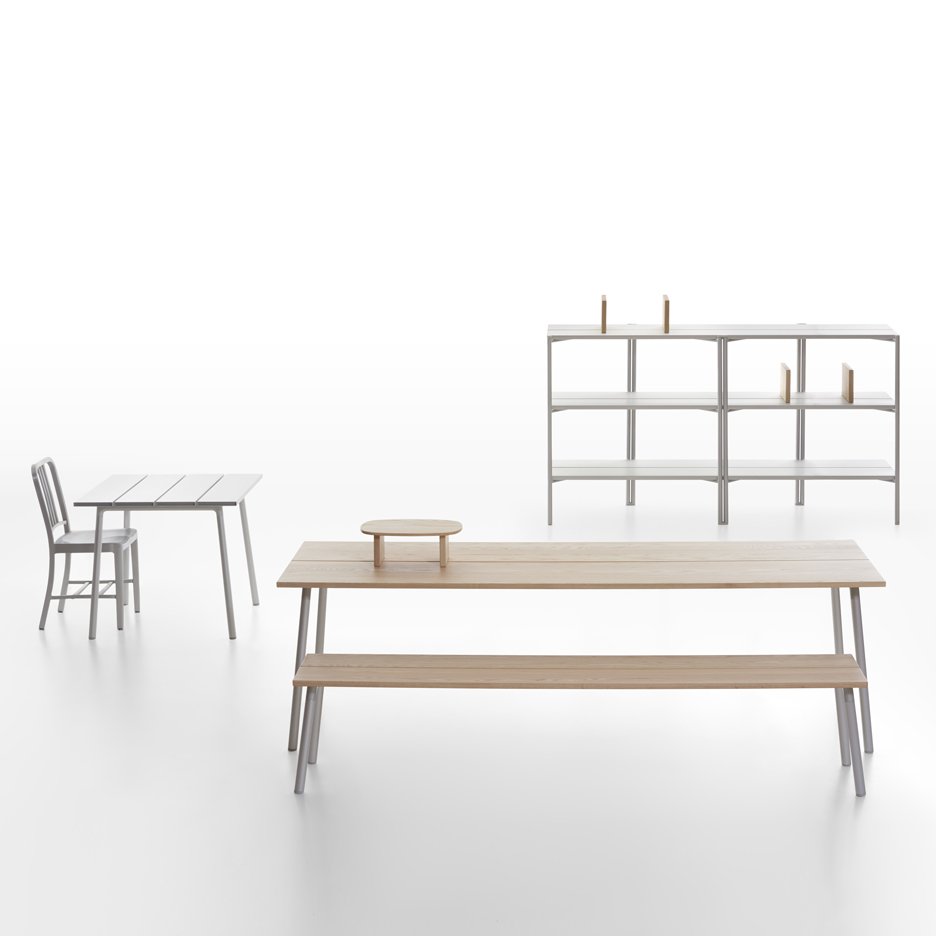 A small opening at the base of the back rest enables easy moving and carrying.

"[Alfi] was inspired by the woven cane brasserie chairs you see out everywhere on Parisian sidewalks, which have rounded backs and flat seats," said Morrison.

Emeco also showed a range of desks and tables based on canteen furniture and park benches and designed by London studio Industrial Facility, at this year's Milan design week.

The brand was founded in 1944 to lightweight, non-corrosive, fire-resistant and torpedo-proof chairs for the US Navy, including the 1006 Navy Chair.

Read on for more information from Emeco:

The American furniture company Emeco was founded in 1944 to make lightweight, non-corrosive, fire-resistant and torpedo-proof chairs for the US Navy. The classic 1006 Navy Chair was born.

Made to last at least a 150 years, it was light, smart, functional and strong – because that was the best we could do. Today our craftsmen in Hanover, Pennsylvania continue to handcraft chairs that are so strong they are passed down through generations – that's how we define sustainability.

Emeco is leading the industry, exploring and innovating ways to use consumer and industrial waste, and environmentally responsible resources to create and build simple, timeless furniture. We work with the world's best designers and influential corporations including Philippe Starck, Norman Foster, BMW, Frank Gehry, Coca-Cola, Jean Nouvel, Konstantin Grcic, Nendo, and Jasper Morrison to make chairs that live up to the standards that we inherited from our founders with a vision to make a difference.

Jasper Morrison was born in London in 1959. He graduated in design from Kingston Polytechnic in 1982. Then he attended the Royal College of Art, which included a year at Berlin's HdK art school. In 1986 he set up his Office for Design in London. He established himself with two installations: Reuters News Centre at Documenta 8 in Kassel in 1987, and Some New Items for the Home, Part I, at the DAAD Gallery in Berlin in 1988.

Jasper's earliest designs were produced by Aram and SCP in London, Neotu in Paris, FSB in Germany and Cappellini in Italy. In 1989, he began collaboration with Vitra with the exhibition Some New Items for the Home, Part II, at Milan's furniture fair. In 1994 Jasper began a consultancy with Üstra, the Hanover transport authority, designing a bus shelter and a new tram for the city.

Further collaborations began in this period with the Italian companies Alessi, Flos, and Magis, and the German porcelain manufacturer Rosenthal. In the 2000s Jasper began consultancies with Muji, Samsung, Ideal Standard and Established & Sons. In 2006 he collaborated with Japanese designer Naoto Fukasawa on the exhibition Super Normal at Axis Gallery in Tokyo.

It was followed by a book and tour to London, Milan and New York. This exhibition inspired the opening of the Jasper Morrison shop beside his London studio in 2009. Since 2010 Jasper has collaborated with Spanish companies Camper, Kettal and Andreu World, and US companies Maharam and Emeco.

He is art director of Swiss electronics company Punkt. Jasper Morrison has presented many exhibitions at locations including at Axis Gallery and at the Musée des Arts Décoratifs Bordeaux. In 2015 a retrospective exhibition will open at the Grand-Hornu, Belgium, accompanied by a new monograph A Book of Things. Previous books include Everything But The Walls and The Good Life, both published by Lars Müller. Jasper Morrison Ltd currently has offices in London, Tokyo and Paris.