A wooden structure and hand-built joinery are left exposed throughout the interior of this compact house in Osaka Prefecture, Japan, by architecture studio Hitotomori (+ slideshow).

Hitotomori collaborated with fellow studio Hane-Kenchiku-Koubou on T-intersection Fence House, which provides a home for a family of four on a site in Matsubara flanked by three other properties.

In response to this hemmed-in setting, the architects gave the small two-storey residence a durable metal exterior, but chose to create a warmer aesthetic inside through the use of exposed, unfinished wood. 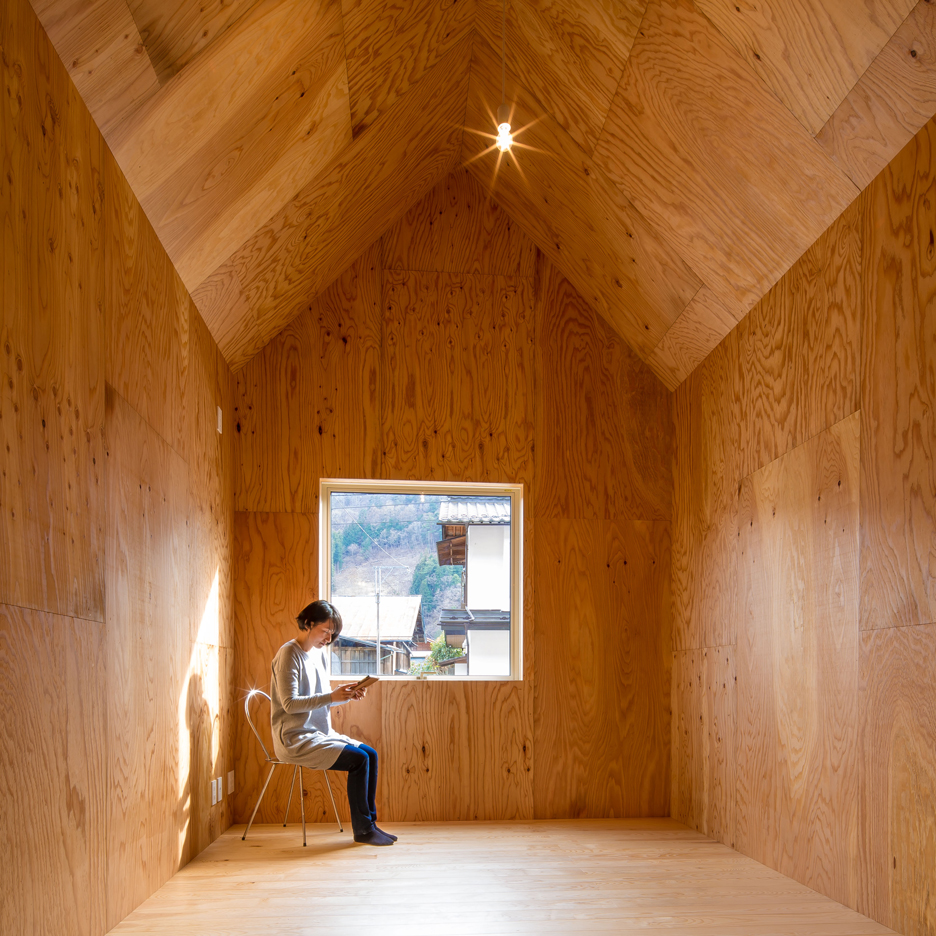 "The hand-made timber-framed construction and highly detail-oriented carpentry give this building an appearance of true beauty," said Hitotomori founders Tomoko and Yoshiaki Nagasaka.

The building has an area of less than 80-square-metres, with an open-plan ground floor containing all of the living spaces and a more private mezzanine level above.

To give residents a small amount of private outdoor space, the building's perimeter fence is a full-height wall, clad with corrugated metal that acts as a false facade. Behind it, the building's real facade can be opened out up to a small terrace.

"The fence is designed as the facade of the house," said the architects.

"Morning light is filtered through a large square of frosted glass within the fence," they continued.

"Light also passes between the top of the fence and the eaves of the house, and is diffused by the leaves of the trees, creating an effect one would not expect from the dreary surrounding environment."

Inside, the ground floor has an L-shaped layout.

At the front of the space, a family dining table sits in between a small kitchen area and a banquette seating bench that forms a lounge.

All of these furniture elements were custom made using plywood, with the addition of a stainless-steel worktop in the kitchen and leather upholstery for the bench.

The built-in furniture continues towards the rear of the space, where the floor steps down to create a traditional Japanese space covered in tatami mats.

A staircase built into the rear of a bookcase leads up to the small upper level, which contains two bedrooms.

There is also a third bedroom, tucked away on one side of the ground floor.

A sloping roof creates high ceilings at the front of the house. Internal windows allow views down into these living spaces from the rooms above, but can be concealed with wooden shutters.

"It is the modulation of light and shadow and the way breezes pass through the house which gives the Fence House its individual character and makes for a rich living environment," added the architects.

Hitotomori is one of many studios that has opted for plywood interiors to create a warm appearance while also keeping costs down. Other recent examples include an artist's studio in Moscow and a Paris culinary workshop.

Photography is by Youhei Sasakura.