Designers Ron Culver and Joseph Sarafian have developed a method of casting concrete in Lycra stretched by robotic arms, which they believe could be used to create radical new architectural forms (+ movie).

Carried out at the University of California, the Fabric Forms project involves pouring a concrete fibreglass mixture into Y-shaped Lycra sleeves stretched into position by six-axis robots.

"This casting method has implications at various scales in the construction site of the future," Sarafian told Dezeen. "We see it being scaled up to create unique building facade elements or even the primary structure of a building."

Because it is easy to produce, the fabric allows users to create many shapes without having to cast a unique mould every time they produce a new shape.

This lends itself well to parametric design, where dramatic forms can be achieved by digitally altering a set of variables at the design stage.

"Parametric design is increasing the need for variation, much of which goes unbuilt because of traditional construction methods' failure to adapt to new digital technologies," Sarafian said.

"We see Fabric Forms as one of many ways to bridge that gap... It allows us to create compound curvature out of a cast object that would otherwise be destroyed when rigid formwork is removed."

It is also, according to the designers, a more sustainable alternative that would reduce labour and material costs, as well as being faster than traditional construction methods.

"Traditional casting methods are both labour intensive and unsustainable," Sarafian said. "Plywood formwork is often stripped and discarded after concrete has cured."

"Each unique shape requires a unique mould. The increased cost associated with a variable design often discourages architects from deviating from repetition."

The designers preprogrammed the stretching movements using Grasshopper3D and Kangaroo software, allowing each of the pieces to be designed to fit together. 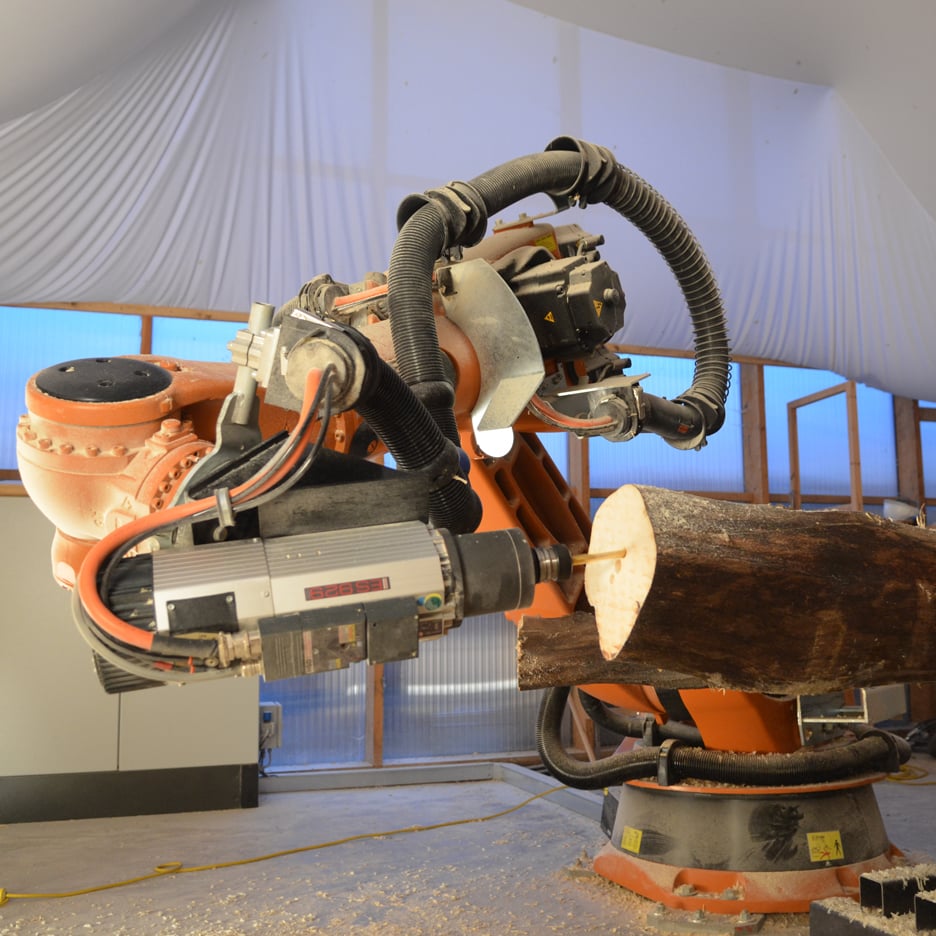 Once the concrete is set, the fabric is then stripped away, leaving minimal waste. The pieces take approximately 45 minutes to harden and are fixed together using a 3D-printed coupler to create larger assemblies that could in future be used as decorative facades or even load-bearing structures.

Other designers who have experimented with fabric-cast concrete include Janwillem Van Maele, who cast a concrete side table inside a suspended fabric mould, and a group of students from the University of Michigan, who created a structure by pouring concrete between two sheets of stitched rubber.

While both of these projects involved manually suspending the fabric from a frame, Sarafian and Culver's method takes advantage of the recent advances in robotic construction.

This trend was pioneered by researchers at the University of Stuttgart, with architects including Wolf D Prix and BIG's Kai-Uwe Bergmann claiming it is the future of the construction industry.

Ron Culver and Joseph Sarafian began this project as an independent study while at UCLA Suprastudio under Julia Koerner. Early experiments were aided by Peter Vikar, Shobitha Jacob, Oscar Li, and Qi Zhang.