Graduate shows 2016: Bartlett graduate Joanne Chen has designed a factory that includes leisure and education facilities, based on the Socialist ideals set out by designer and activist William Morris in the late 19th century.

The arrangement is intended to nurture workers while they create artisanal products to sell to consumers.

Chen completed the project as part of Unit 17 of the Masters programme at the Bartlett School of Architecture in London, tutored by architect Niall McLaughlin with Michiko Sumi and Yeoryia Manolopoulou.

The project is based on a text penned by the English artist, designer and writer William Morris in 1884.

An advocate of traditional craft and campaigner for Socialist reform, Morris was a leading figure of the late 19th and early 20th-century Arts and Crafts movement. His text, A Factory As It Might Be, called for a "Socialistic factory" where divisions between workplace, home and leisure space are diminished.

"The project raises a critique on the contemporary view of work as compensatory toil rather than fulfilment and pleasure," said Chen. 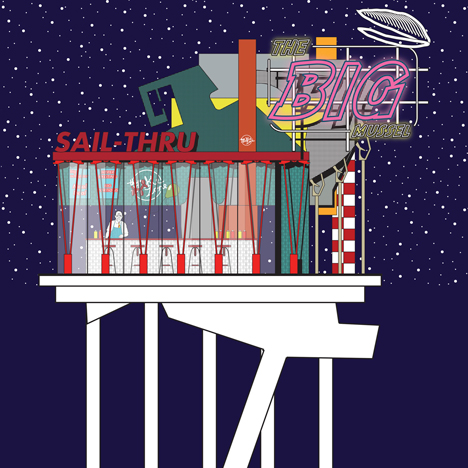 "The building adopts an interwoven spatial language, interspersing production spaces with gardens and waterscapes to create a multi-orientational experience while preserving the building's sense of transparency."

The proposed site for the factory is a landscaped plot on the banks of the River Thames in Hammersmith, west London, just a short distance from Morris' former home, which now operates as a museum for his work.

Chen's renderings show highly ornamental interiors tailored to each type of workshop, as well as a dining hall, library, and educational spaces.

Decorative doorways connect rooms with pyramidal glazed ceilings, while walls are lined with wallpaper based on the intricately patterns Morris became best known for.

The ornate design is a reaction against the minimalist Scandinavian design that is ubiquitous in today's homes thanks to furniture manufacturers like Ikea, said Chen.

"The factory departs from operations of conformity as in Ikea, manufacturing bespoke home furnishings and decorative arts," said the architect.

"It attempts to reengage with craftsmanship whilst overlapping it with contemporary technologies and to reestablish the human relationship to work, workspace and pleasure of work."

The project is on show as part of the Bartlett Summer Show, which runs until 9 July at 140 Hampstead Road, London.

Other projects from this year's graduate shows include a proposal by Royal College of Art student Kit Stiby Harris to relocate the Parthenon to London, a sneezing toaster by fellow Royal College of Art graduate Hyerim Shin and a range of homeware created using a giant Spirograph toy by Shawn Yang from Taiwan's Shih Chien University.