MVRDV has moved into a new studio in central Rotterdam, featuring multicoloured meeting rooms, a plant-covered chandelier, an oversized dining table and a staircase that doubles as a seating area (+ slideshow).

The Dutch firm relocated from its previous studio in the west of the city to make room for a growing team, which now includes 140 staff members based in Rotterdam.

Located within a post-war building complex called Het Industriegebouw, the new 2,400-square-metre office aims to combine some of the most successful features of MVRDV's previous space with a selection of new, quirky details.

The concept was for a series of rooms inspired by domestic interiors, with areas for dining, lounging and socialising, as well as more traditional work spaces and meeting rooms. This led to the project name MVRDV House.

"The expanding MVRDV family needed a new house, so this is exactly what we tried to capture," explained Jacob van Rijs, who co-founded the firm with partners Winy Maas and Nathalie de Vries. 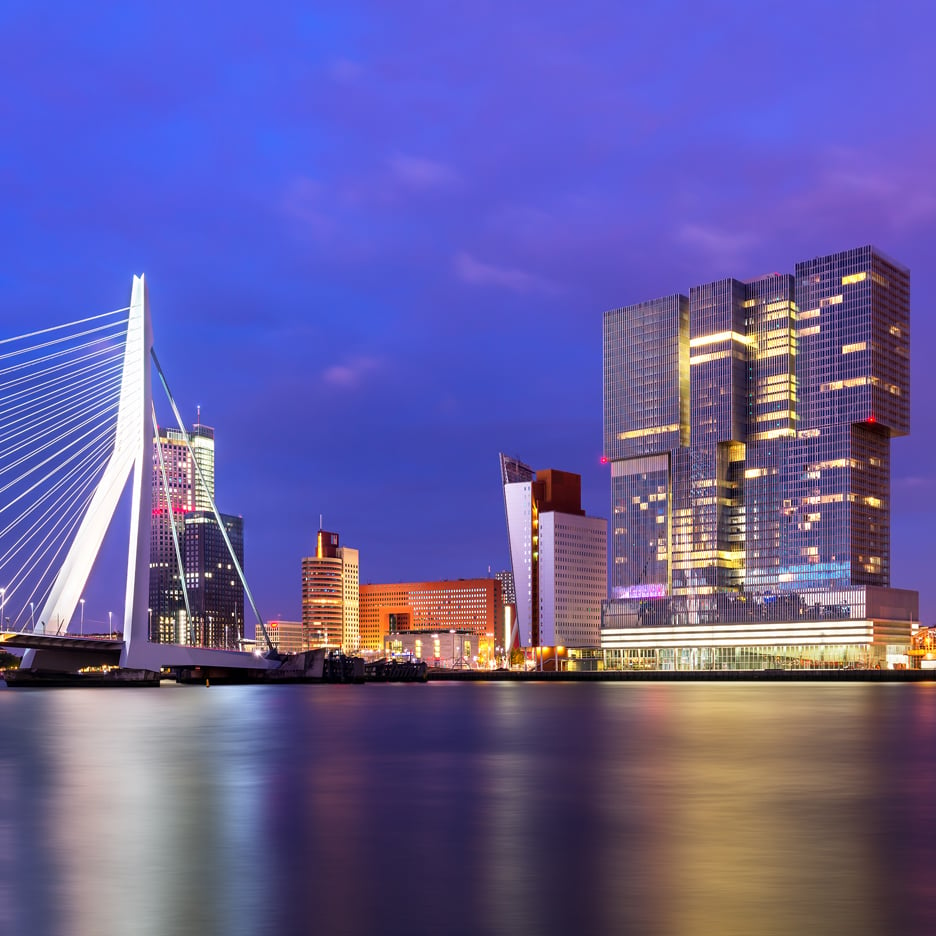 "[It has] everything that the home requires – a living room, a dining room, a sofa for the whole house to sit together," he continued.

"This was also a chance to capture how we work and function as an office, then tailor-make new spaces that would boost our working methods and output – efficient spaces that enhance the collaborative ways in which we work."

At the heart of the office is a space dubbed the Family Room.

A long dinner table stretches all the way down this space, allowing large groups to sit down and eat together – as they did in their previous workplace.

In front of the table, a circular reception desk sits directly beneath the plant-covered chandelier.

This element also integrates a drop-down projection screen that can be used for presentations, as well as to screen major events like football matches.

Other features in this space include a huge flowerpot with a welcome message in its middle, and a set of wooden bleachers that function as both an entrance staircase and a seating area.

Glass-fronted meeting rooms are slotted into the arches on one side of the central space, spread out over two storeys. MVRDV described the effect as being "like a section through a doll's house".

Each room has its own theme, with brightly coloured surfaces and custom-designed furniture. A green room provides a space for informal meetings and table tennis, a dark blue room is used for more important presentations.

Others include a drawing room with magnetic walls, a brown library room and a red room containing a television.

The atelier sits on the opposite side of the building and is much more straightforward in design. Desks are grouped together for different teams, with storage areas for files and models slotted in between.

High-level windows and skylights ensure the double-height space is filled with natural light throughout the day.

The three directors occupy a dark corner near the printer and coffee area, to encourage them to venture out among the rest of the team as much as possible.

Rotterdam is establishing itself as a world-class destination for architectural innovation, thanks to new landmark buildings and experimental construction projects.

MVRDV has been based in the city since 1993. Its largest project there to date is the colossal Markthal, located a few streets away from the new office, and it is currently working on a bowl-shaped art depot for the Museum Boijmans Van Beuningen.

The Het Industriegebouw complex was designed by Dutch post-war architect Hugh Maaskant in 1952 – the same architect behind the building where MVRDV recently built a giant staircase out of scaffolding.

The move positions the company among a community of creatives and entrepreneurs.

"For us, it also makes a lot of sense to be part of Het Industriegebouw as a building and a community," said Van Rijs.

"Now we share a work space that could allow for future, flexible growth and collaboration within the building, just as was the design intent of the original architect."