Brexit: without free movement of international stage designers and students, the UK risks losing its status as a world leader in theatre, according to the Society of British Theatre Designers.

The SBTD – which represents theatre designers across the UK and abroad – has said that restricting the amount of creative talent allowed into the UK after Brexit will be disastrous for its industry.

In a statement sent to the government's Department for Culture, Media & Sport (DCMS), it called for "our strong ties with Europe" to be preserved in negotiations for the UK's exit from the European Union.

This will be essential, it claimed, in maintaining its contribution to the music, performing and visual arts sector, which adds £5.4 billion a year to the UK economy.

"In order for British theatre design to remain a world leader, we reject any restriction on the free movement of performance makers into the UK," it said.

The organisation produced the statement following a Dezeen callout for support with a submission to a parliamentary inquiry into the impact of Brexit – the deadline for which is today.

We asked companies and individuals to share their views on how Brexit will affect their businesses.

The SBTD said that non-British figures such as Ralph Koltai, Richard Hudson, Maria Björnson and Stefanos Lazaridis – who chose to stay in the UK after training here – prove how important foreign talent is to British set design.

"UK theatre and performance designers are internationally well respected and in demand," it said.

"This reputation is based on a historical openness to absorb and welcome performance practitioners from Europe and around the world, who have chosen to live and work in this country." 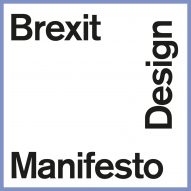 The organisation also stressed the importance of allowing British designers to work elsewhere in the EU, and to reassure non-British performance designers based in the UK that they are welcome to stay.

In addition, it called for the government to halt plans to restrict the number of foreign students in the UK.

"The brightest creative students from around Europe and the world are attracted by our reputation to study theatre and performance design in the UK and make up a significant proportion of many UK design courses," it said.

"Apart from the financial contribution they make to our economy, their presence opens the horizons and thinking of our own students."

Dezeen plans to make a submission to the Culture, Media and Sport Select Committee inquiry into the impact of Brexit on the creative industries, following the publication of our Brexit Design Manifesto last month.

The deadline for submissions to the inquiry is Friday 28 October 2016. Therefore we urgently require views from the architecture and design sector by end of play on Monday 24 October.

How you can help

› Send us your views on how Brexit will affect your business. The select committee is particularly interested in hearing how it will affect your ability to attract and retain talent from around the world (read the full terms of reference here). We need this by Monday 24 October. Please keep it brief and email it to [email protected].

› Sign our Brexit Design Manifesto. It's not too late! The more signatories we have, the more powerful it becomes. Signatories automatically receive our Brexit newsletters (you can read the first one here).

› Make your own submissions to the select committee inquiry. If you do this, please mention that you are a signatory of the Brexit Design Manifesto and support its aims – it's vital that parliament receives a coherent message from our sector rather than a cacophony of voices.

Even better, please copy and paste the following passage (or a variation of it) into your submission to the inquiry:

I/we am/are a signatory of the Brexit Design Manifesto. I believe the UK's world-class architecture and design sector can help the UK after Brexit. But first the government must help design.

I support the manifesto's key demands to government, which include: recognition of the sector's importance to the economy, our reputation as a nation and the wellbeing of our citizens; retention of the sector's strong links to Europe and the rest of the world; the championing of design in schools; investment in higher education; retention of student exchange and research programmes; ability of firms to recruit talented staff from anywhere in the world with the minimum of cost and bureaucracy; the right of overseas staff working here to remain; policies that help small-scale manufacturers and makers; a strong intellectual property framework to help designers protect their ideas both here and abroad.

› If you do make your own submission to the inquiry, please share it with us. If it is confidential, please make this clear and we will not disclose its contents.

Photograph of John Pawson's Chroma is by Richard Davies.