These atmospheric renderings reveal designs by Oslo-based Reiulf Ramstad Arkitekter for a pair of angular holiday cabins in the Norwegian countryside.

Reiulf Ramstad's firm was commissioned to create the cabins as a family retreat in the Røldal valley, which is located 300 kilometres west of Oslo at the northern end of the Røldalsvatnet lake.

The architects decided to split the property up into two halves as it will mean impacting on the natural landscape as little as possible.

This resulted in a pair of similarly shaped but differently sized structures – a larger 63-square-metre volume containing the main living spaces and a smaller 11-square-metre annex alongside.

"Dividing the structures also answers to the need of a high flexibility and to accommodate different family compositions in separate spaces," said the architects. 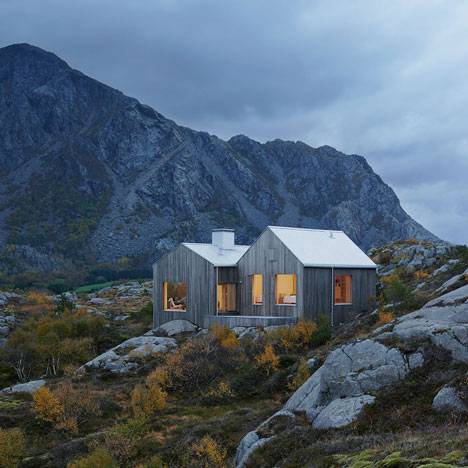 Both cabins will be constructed from wood, with sloping undersides as well as pitched roofs. These angles relate to the floor levels inside, which are split up to create separation between different areas.

Rather than adding lots of small windows, the architects also plan to give each block one large wall of glazing, facing out towards the best view.

"The articulated section is adapted to the steep terrain and is assigned to create interconnected floors and capture the views of both the forest and the hillside," said the architects.

Although based in Oslo, Reiulf Ramstad often takes commissions in rural locations, and tends to choose wood for many of his projects. Past examples include a wooden church beside a fjord and a glass-fronted mountain lodge.

The firm has also contributed structures to Norway's designated tourist routes – a project that has involved architects including Peter Zumthor, Snøhetta and Todd Saunders.

Renderings are by Reiulf Ramstad Arkitekter.