Next up in our 2016 review, reporter Eleanor Gibson selects 10 of the most unusual and impressive staircases from the past year, from a gravity-defying look-out tower to a cavernous concrete well and a minimalist flight of folded metal steps.

This weathering steel staircase appears to defy gravity by cantilevering off a hilltop in Flanders. Designed by Belgian studio Close to Bone, the lookout point at the top of Vlooyberg Tower offers views over the rolling farmland and a nearby forest.

A sheet of steel measuring just six-millimetre-thick was folded and welded before being finished with a coating of atomised brass to create this staircase by London-based Bell Phillips. A matching handrail runs along the existing brick wall, while the other side is left unguarded.

Read more about the London apartment ›

This imposing cast-concrete staircase marks the gateway between old and new in Herzog & de Meuron's extension to the Musée Unterlinden in Colmar, France. Spirally downwards, the steps lead into a new underground gallery.

Another spiralling concrete stair forms the centrepiece of this seaside house in Japan by Kazunori Fujimoto Architect & Associates. The sculptural stair twists up towards a circular opening, and has a curved underside and no handrail.

Read more about House in Akitsu ›

A white metal-framed staircase connects the two floors of this Parisian apartment. Light filters between the open risers and banisters, while solid wooden steps at the bottom form a small storage area.

A red balustrade curls around this staircase, which is set into a niche at one end of an Alpine fire station. Its bold russet colouring offsets the muted pigment of the red concrete building, designed by Italian studio Pedevilla Architects.

British architect Luke Lowings worked with American sculptor James Carpenter to create this patterned glass staircase. Standing alone, it rises the full height of the two-storey space leading up through a skylight to a roof terrace overlooking Hong Kong's bay.

Fluorescent orange paintwork ensures this spiralling staircase by architect Martin Dulanto contrasts the subdued colour scheme of the rest of Casa Blanca house. Against the white exterior and grey internal walls, the steps are the the most prominent feature in the building.

Timber beams are stacked to form this Jenga-like staircase, which has cupboards and shelves integrated into the overhangs of various steps. Studio Farris Architects added a platform on top of the structure to host an office with two workstations.

The Stairs, Netherlands, by MVRDV

Dutch office MVRDV created this huge scaffolding staircase – measuring 29 metres high and 57 metres long – that leads up to an observation deck on the roof of an office block in Rotterdam's centre.

Read more about The Stairs › 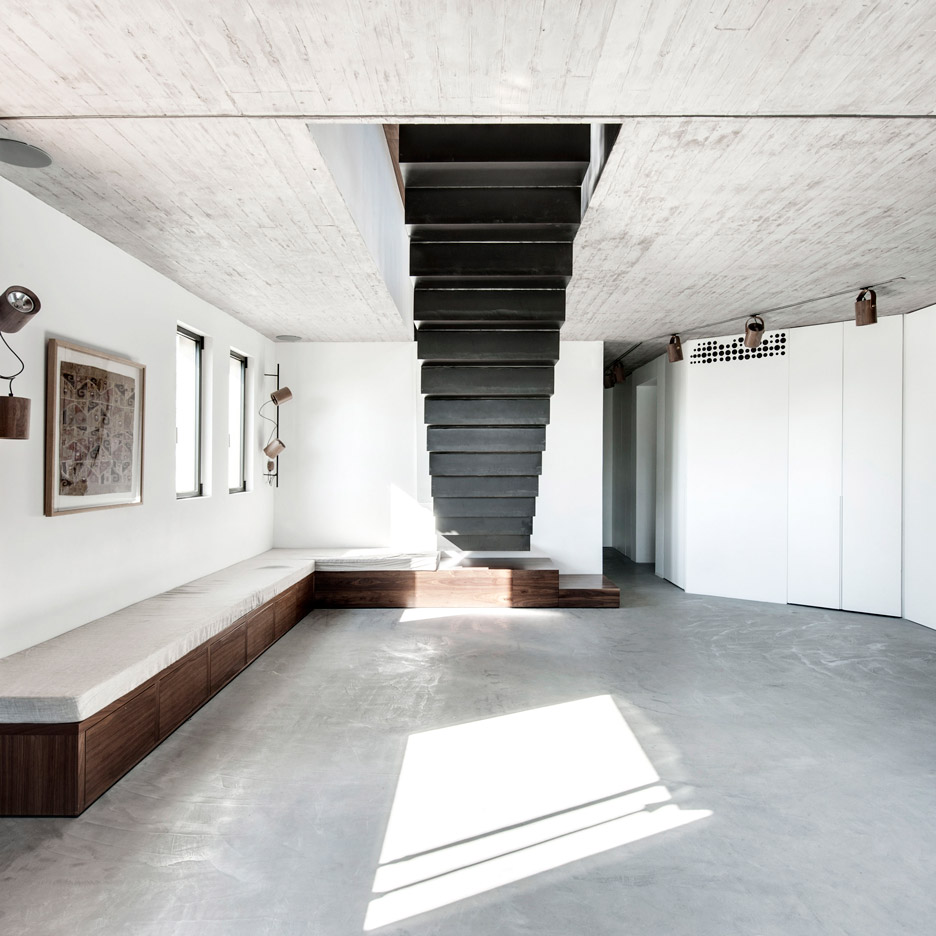