Dezeen had its best-ever year in terms of visitors in 2016, with unique visitors up nearly 11 per cent to over 20 million and visits up 8.5 per cent to almost 50 million.

We celebrated our 10th birthday in November and this was our ninth successive year of audience growth, making us the most popular design website in the world according to web data firm Alexa.

For a list of the 10 most popular stories from 2016, see the story we posted last week.

Figures from Google Analytics show that our unique visitors (users) grew last year to 21.12 million while visits (sessions) grew to 47.52 million. November 2016 was our best month ever, with 2.62 million users and 4.37 million sessions.

Mobile visits grew almost 30 per cent to 13.31 million. Our desktop audience also grew, in defiance of industry trends, although by a more modest three per cent.

Desktop traffic is still by far our biggest audience, representing two thirds of our readership, highlighting the fact that many of our readers in the architecture and design industries visit Dezeen from work for professional reasons.

Our biggest audience is now the USA, which has leaped ahead of our UK audience since we opened an office in New York in 2015. However UK traffic also grew strongly, by 12.5 per cent.

Germany, France and Australia complete our top five countries, with all of them posting strong growth.

The biggest audience gains over the past year have been in India, which is up over 20 per cent and is now our 10th biggest market.

The most dramatic growth was in Facebook video, where we grew from almost nothing in 2015 to over 30 million video plays last year.

Dezeen was also named the most commented design website in the world in 2015 and was the only architecture or design site to appear in the Comment1000 list of most-commented sites.

Thanks for all our readers for their support! We hope you keep visiting in 2017 and meanwhile please use the comments section below to let us know what we could be doing better. 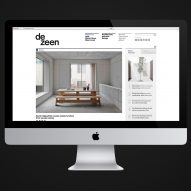 Dezeen is officially the world's most popular online design magazine