Todd Bracher has become the latest designer to create a contemporary living space at IMM Cologne, with an installation that "ignores the architecture and starts from the beginning".

The New York designer was tasked with presenting his vision of a modern living space for the furniture fair's annual Das Haus installation.

In response, he created a living space free from designated rooms – allowing each area of the house to be open to interpretation.

"You open any typical interior design publication, you'll see that the bed goes there because the window's over there, you'll see two side tables with little lamps on them," Bracher told Dezeen. "It's a typical organisation of how we are educated to live."

To form the building's exterior, Création Baumann's semi-sheer textiles – which Bracher describes as a skin – were stretched across wooden frames.

"The house is conceived as almost an organism, the textiles are meant to act as a skin and to allow air and light in and out," he said.

"I chose natural-looking materials and tried to remove opinion. It's built purely around purpose and intent."

For the interiors, Bracher looked to the main purposes of the home and divided them into three categories – provisions, relaxation and hygiene.

Visitors enter through a Douglas fir-lined space with a long table in the middle. Surrounding shelves, much like a cabinet of curiosities, are used to display personal objects and food. A cubby hole at one end of the space is filled with tools.

A smaller, darker area behind the space is designed for daydreaming rather than sleeping and includes a large white lamp intended to resemble the moon.

Washing areas are located outside in a small alcove surrounded by rocks.

"We think of bedrooms to sleep in, but for me there's so many more aspects that our homes don't provide," said Bracher. "What's most important is sustenance, sustaining your body, mind and spirit. You need to rest, and you need hygiene."

IMM Cologne takes place from 16 to 22 January 2017. Products launching at the fair include a collection of tables designed by architect Hans Bølling and tinted glass shelving that can be customised online by Werner Aisslinger. 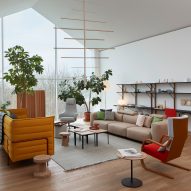