This remodelled office interior by Atelier Pierre Thibault is divided by a long wood-clad walkway, dotted with spaces for vegetation and socialising.

The new Quebec City offices for web hosting company OVH were completed in 2016 by the local architecture firm, which overhauled the space to better suit the users' needs.

Open-plan workstations and enclosed meeting rooms are located on either side of and elongated boardwalk, which runs through the centre of the single-storey office.

Workers can lounge in dedicated areas of the wooden feature, which contrasts with the rest of the office.

"The platform's play of levels allows many possibilities for occupation," said the architects.

"The centre of the boardwalk contains a generous kitchen island that acts as a space for socialising, but can also be converted into an informal workspace."

The room's narrow layout allows ample light to reach each desk, as well as providing employees with impressive skyline vistas.

"The new organisation clears the floor to allow privileged views out onto the city," according to the architects.

A variety of planters fill the office, and were installed with wheels attached to their base, allowing them to be moved or reconfigured. Similarly, the cube-shaped private meeting rooms are also movable.

The studio employed a minimal palette for the interior finishes.

The central walkway is rendered in cedar boards, while the rest of the office, including walls, mechanical equipment and structural columns are a crisp white colour.

Other Canadian office interiors include a monochrome design for a Montreal-based design company and a co-working space that occupies the expansive interior of a 1917 bank building.

Atelier Pierre Thibault is mostly known for its residential projects located in natural settings. Other examples of the firm's work include a home split in two halves connected by a bridge and a residence perched atop a broad platform in the woods of Canada. 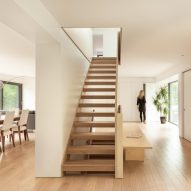