This home in the woods of Wisconsin was originally built as a single, open-plan volume by Salmela Architect, and subsequently extended on three occasions to fit its occupants needs.

"The first was an open living space for sleeping, working, and visiting, with a separate sauna and passageway defining a connection to the forest beyond," said the firm, founded by David Salmela and based in Duluth, Minnesota.

The second phase was an extension to the sauna wing, which added a home office, and a mezzanine for accommodating guests.

As this volume is slightly set apart from the main part of the home, visitors are afforded more privacy.

Afterwards, the architects installed an outdoor shower and fireplace – two features that are found in some of the studio's other Scandinavian-style projects.

The final phase was an addition at the northern end of the house of a private master bedroom raised on pilotis.

The landing that leads to this suite also contains a small lounge area that is more intimate than the main living room.

Despite being built at various moments in time, the home maintains an overall consistency.

"The same wood finishes continue on the exterior and interiors to tie all the sections together," said the firm.

These are protected by the large overhanging roof, which also covers the passageway between the main building and the sauna wing.

The house is furnished with minimalist pieces that complement its ubiquitous wooden finishes and details.

Other features include a central hearth made of whitewashed cinder blocks that mirrors the residence's outdoor fireplace.

David Salmela has completed many projects in the state of Wisconsin. He has also built a home that has a courtyard framed by a sauna separated from the house and a rustic dwelling made of stacked boxes with dark grey wood walls. 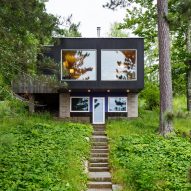