Yves Béhar's studio Fuseproject worked with robotics company Cobalt to create this robot security guard, designed to be in "stark contrast to the Hollywood dystopian Robocop".

The robot was unveiled today in San Francisco by new company Cobalt, which was founded in 2016 by engineers formerly of Google X and SpaceX.

Looking more like a tall speaker than an authoritarian android, the Cobalt security robot has an exterior made from aluminium and fabric.

It is designed to operate in offices and foyers, where it performs basic functions like scanning ID cards, but also uses its sensors to detect possible security threats.

Béhar is behind the robot's form and interaction design, for which he focused on creating a machine that would be accessible and look unthreatening.

"We wanted to design Cobalt to represent a best-case scenario in which technology supports our daily lives," said Béhar. "Technology can provide awareness, and accountability, keeping us safe without feeling authoritarian."

"Cobalt is a stark contrast to the Hollywood dystopian Robocop – it discreetly fits into its environment, provides a platform to grow with our needs, and enhances human ability without replacing the human."

Both Béhar and Cobalt stress that the self-driving robot is intended to work alongside humans rather than replace them.

With data gathered through its sensors and interpreted by advanced algorithms, Cobalt claims the robot will be able to detect and flag anomalies beyond what would be noticeable to a human guard. 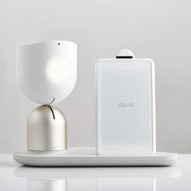 It is able to work around-the-clock, and at smaller buildings where the cost of a human security guard might be prohibitive. It also keeps human security personnel out of situations that might be dangerous.

However, humans are not entirely removed from the equation, as robot fleets are supported by a human supervisor who may be working remotely. People in need of assistance have the option to use the Cobalt robot to call the supervisor, who then appears on the screen, giving the machine a literal human face.

"One of the core fundamental values of Cobalt is to enable human-to-machine interactions,” said Cobalt CTO and co-founder Erik Schluntz. "The way we do that is designing a robot to interact with and around people."

Béhar – who has already shaped the design of robotic devices ranging from cribs to juicers – gave the robot a fabric covering to convey a "soft and friendly" persona.

"We decided that the robot should not adopt a humanoid personality," he said. "Instead, it should aesthetically align with the furniture and decor of the office environment."

The tensile fabric – which covers the robot's sensors, cameras and self-driving mechanism – also has the benefit of preventing overheating by increasing airflow.

A CNC aluminium element at the head of the robot holds the display, office ID scanner and various buttons. It can roam fluidly around a space, and is just tall enough to operate around most open-plan office cubicles.

Some common abnormalities Cobalt suggests the robot would spot are an open window, a loud noise, a gas leak, a suspicious package or an after-hours intruder. In the case of an incident, the robot begins recording and engages its supervisor.

"Security guards should not put themselves in dangerous situations, nor do they have the ability to know everything that is happening in an office," said Béhar. "This is where a robot can be truly effective."

"With the right sensing abilities, a robot can detect anything happening that is out of the ordinary."