After spotting a cartoon dining room set at Chamber gallery earlier this month, we've rounded up a variety of chairs, tables and lamps that resemble animated characters and comic book drawings – whether deliberately or not.

Fictive Kin by Andy and Dave

Each dining chair in this collection by Brooklyn duo Andy and Dave has a different personality, with playful shapes, colours and materials all providing unique attributes.

The furniture is on show at Chamber gallery in New York's Chelsea, as part of an exhibition titled Domestic Appeal.

Designed for Walt Disney Japan, each of the maple wood tables is dressed in a knitted sleeve to like one of Winnie the Pooh's friends including Tigger, Piglet, Eeyore and other inhabitants of Hundred Acre Wood.

Read more about the Pooh Tables ›

Nendo has also looked to Japanese cartoons for design ideas. The fifty metallic chairs in this set, first presented in a Milanese cloister courtyard, are based on the variety of expressive lines and speech bubbles found in manga comic books.

The backrest of Grcic's plastic Sam Son chair has been compared to a pool noodle, and its designer has admitted himself that there is "a hint of a cartoon character" about the shape.

Produced by Italian brand Magis, the design debuted during Milan design week in 2015.

The idea for the shape of this lamp, produced by Normann Copenhagen, came from a cartoon character called Calimero – a little chicken with an eggshell on his head. The character was created to advertise an Italian soap brand and later licensed for a series in Japan.

Read more about the Cap lamp ›

Hayón went slightly bananas when designing this concrete resin table – shaped like a monkey from the waist up, holding a flat tray above its head like a waiter. But BD Barcelona went ape for it and put it into production.

"I just love the idea of a tropical animal – the monkey – serving you in a funny position," said the Spanish designer, who based the mould for the table on one of his many whimsical drawings.

Read more about the Monkey Table ›

Perhaps its the large looping arms that could be mistaken for ears, or the sloping seat and curved legs that resemble a trunk – or both – that led Rygalik to name this chair after loveable cartoon elephant Dumbo.

Read more about the Dumbo chair ›

Cartoon Chairs by the Camapana brothers

Each is made using various sizes of stuffed Disney toys, stitched together to form soft bowl-like seats made up of multiple Mickeys, Minnies and more.

Read more about the Cartoon Chairs › 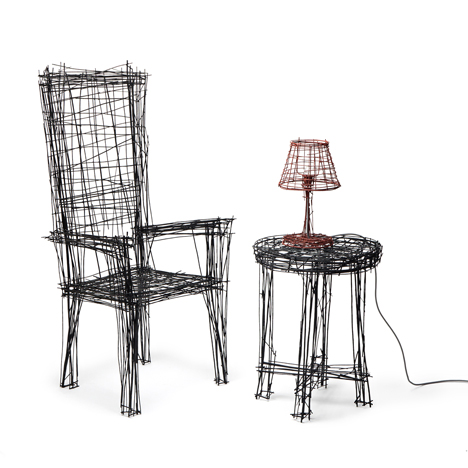 Furniture that looks like line drawings by Jinil Park