Chilean architect Gonzalo Claro has renovated a family home in Santiago, reducing the ground floor footprint but adding a level for bedrooms.

The Las Quilas house was completed in 2015 for a young family that wanted a home that would integrate seamlessly into the neighbourhood. Claro described the project as "a house shaped as a house".

"The proposal intends to combine the complexity of the interior with a formal simplicity, an edification without ornaments nor decoration," said the architect, who set up his studio in 2012.

First, the architect's intervention involved cutting the existing house in half, to make room for a garden at ground level.

An additional storey was then built above the preserved portion of the structure. This lightweight extension is made of galvanised steel and panels of oriented strand board (OSB) – a type of plywood known for its low cost, strength and affordability.

Visitors enter the 300-square-metre home through a central vestibule that directs their gaze to an inner courtyard filled with vegetation.

The western portion of the house contains a combined living and dining room. Floor-to-ceiling sliding glass doors allow this space to open to the exterior.

The kitchen is located next to the main living area, but can be closed off with a sliding door built into the wall.

The east side of the interior courtyard contains a secondary living room, and a angular black staircase that leads to the second level.

Upstairs, the architect laid out four bedrooms along a longitudinal corridor. Two of them are located on the home's north facade, and two face south.

The architect's intent was to unify the two distinct structural systems. "Both the original and new structure were covered and protected by a waterproof continuous layer, leaving one compact monolithic volume," said the firm.

"The result gives a monolithic volume with an austere and opaque exterior aspect; dissolving the limits of the ground, walls, and cover."

The dark exterior covering of the pitched-roof home contrasts the interior spaces, which feature pale hues of wood, white walls, and light-filled spaces.

Other projects in Chile include a home with an angled roof designed to give residents views of the sky and a beach house lifted on stilts comprised of stacked and rotated wooden volumes.

Photography is by Nico Saieh, unless stated otherwise. 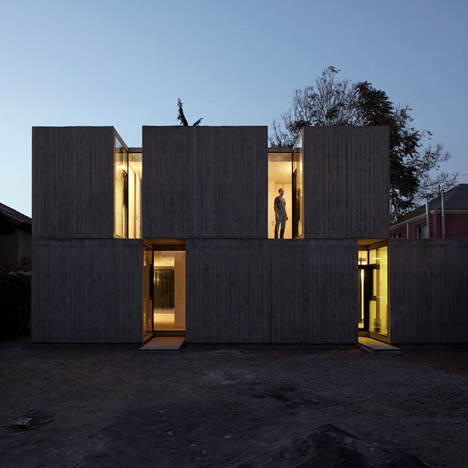