This week on Dezeen, Karim Rashid revealed his difficulties trying to enter the US and Hillary Clinton's logo designer expressed regret over the election result.

New York-based designer Karim Rashid believes his Muslim name is the reason he was stopped and held by US Border Control at JFK airport this week, despite having been a legal US citizen for the last 13 years.

In other US news, Frank Gehry's Philadelphia Museum of Art renovation broke ground and the architect's early drawings and sketches were acquired by LA's Getty Research Institute.

Plans to construct a Thomas Heatherwick-designed park on New York's Hudson River have hit a major bump after a federal court vacated the project's permit.

The only female partner at BIG defended the firm's gender balance after a social media backlash, and the firm revealed a yin-and-yang-shaped panda house for Copenhagen Zoo.

As the UK begun its withdrawal process from the EU, Brexit supporter James Dyson claimed he was "enormously optimistic" about business prospects outside Europe.

RIBA has revealed its new Broadway Malyan-designed architecture centre for Liverpool, and industry research revealed that more skyscrapers were constructed in London last year than ever before.

In design news, IKEA stepped into smart home products with its new Trådfri lighting range and we featured highlights from DesignMarch 2017.

In the lead-up to Milan design week, we rounded up 15 must-see exhibitions and installations and predicted eight trends set to emerge from the fair.

Popular projects included a "quiet" Northern California home, a house in Hiroshima that straddles a circular path and a Russian dwelling with a steeply pitched roof. 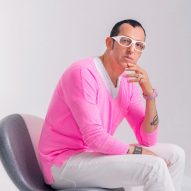 Karim Rashid suffers "crazy" ordeal trying to enter the US