Designed for the rug maker's 30th anniversary, the Hayon x Nani collection is based on original sketches created by the Spanish designer. The spidery illustrations feature an array of unusual characters, including human figures with animal heads and abstract patterned shapes.

Each rug was made using a hand-tufting technique, where a manually operated gun adds strands of wool to the design. This allowed Hayon's original drawings to be closely recreated. The carpets have around 50,000 knots per square metre.

The designer – whose giant Stone Age Folk masks are also being shown at Milan design week – created four different rugs, including a square design that can be hung as a tapestry.

Hayon was among the most popular designers of 2016 according to Dezeen Hot List. Before starting his own studio, he worked for photographer Oliviero Toscani and headed up the design department at Benetton's Fabrica research centre.

He has unveiled several projects in 2017 already, including a pop-up pavilion for Stockholm Furniture Fair and playful interiors for a Madrid hotel.

"Who better than Jamie and his surreal world full of characters to celebrate our 30th anniversary? Someone who defies conventions and evokes smiles, vitality, and a joy for life," said the brand's founder Nani Marquina, who set up the company in 1987.

Since then, Nanimarquina has focused on pairing contemporary designers – such as Doshi Levien and Martí Guixé – with traditional rug-making techniques.

The revival of craft has been a recurring theme at Milan design week, which has included updated versions of Japanese lacquerware.

The Hayon x Nani exhibition is at Salone del Mobile from 4 to 9 April. Also launching at the furniture fair is the new 1 Inch chair by Jasper Morrison for Emeco, which the designer describes as one of the most complicated of his career, and a minimalist screwdriver set by Oregon-based designer Erdem Selek. 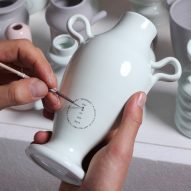