To make the long and thin glass pendant lights, the architects blew molten liquid glass inside dry wooden moulds. The heat of the inflated glass burned the wood, which in turn left the crackled imprints on the glass.

The technique was discovered during a research trip to Lasvit's factory in the Czech Republic, where the architects carried out a series of experiments. The results produced from the dry wooden moulds reminded Kengo Kuma's team of the ancient Japanese technique of shou sugi ban or yakisugi, where wood is charred to preserve it and prolong its life.

"Because of the dry properties of the wood and very high temperatures of liquid glass, the inner side of the mould was on fire," Kengo Kuma & Associates chief manager Marcin Sapeta told Dezeen.

"There was this magic moment where you are able to capture this living texture of the wood inside the glass."

As the moulds can only be burned and used once, each of the lights features different textures, with varying imprints and depths of lines.

Groups of the lights hung together emphasise these subtle differences.

"Each of the moulds is only for one unique lighting feature because of the fact that all the texture is burnt, so you cannot reuse it," said Sapeta. "So each of the lighting features has its own identity and living story behind it."

By making connections between the historical method from Japan with techniques in Lasvit's glass-blowing factory in the Czech Republic, the architects believe they have created a more substantial design.

"We are able to put the soul and have more identity and more story behind it than just design itself," Sapeta said. "We feel design with background, tradition, craftsmanship has much more power."

Lasvit, which was founded in 2007 by Leon Jakimič, presented Yakisugi during Salone del Mobile, which ran from 4 to 9 April 2017.

The Czech brand's collection also featured lights by Boris Klimek, which resemble boiled sweets, and ones by Yabu Pushelberg decorated with slender lines and connected by polished golden links.

Kengo Kuma ranked at number five on Dezeen Hot List, a data-generated list of the most-talked about architects and designers.

The firm's recent projects include a stacked wooden box design for Turkish art museum and the major expansion of the Portland Japanese Garden. Its V&A museum in Dundee is also nearing completion. 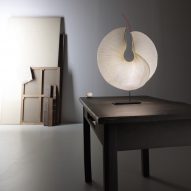 10 of the best new lighting designs at Euroluce