New York designer Karim Rashid has cut up the shape of a wine bottle and then pieced it back together as an offset stack, to make it easier to hold and so it decants while pouring.

Rashid, who has previously created a faceted glass vodka bottle, wanted to break away from the "conservative" wine industry when designing the Decanter bottle for Canadian winery Stratus Vineyards.

To create the unusual silhouette, the designer chopped up a wine bottle at angles into four pieces. As he stacked the sections back together, he slightly offset them so they look as if they have slipped away from one another.

"The wine industry has always been so conservative and really very reluctant to make a change," Rashid said at the bottle's launch in New York yesterday.

"It was almost a joke where I said to the designers in my office, 'why don't we just chop up the bottle?'," he continued. "So we took a bottle and we just chopped it, and when we chopped it we shifted the pieces."

The bottle is made up of three angular blocks, with a more traditional head and neck on top. The middle, larger section shifts in the opposite direction to the sections above and below, to create a handle for holding and pouring the wine.

The edges of the black glass bottle also serve another purpose: catching the sediment of the unfiltered Cabernet Franc. The wine – Stratus' first unfiltered wine – is left on its lees to allows it to age for longer, and improve its aroma and taste.

"The second part which I really liked – and this was incidental – is that when you pour the wine the lees in the wine can be decanted because they get trapped on these edges," said the designer.

He launched the bottle during an event at office furniture brand Teknion's New York showroom, as part of the NYCxDesign festival taking place in the city from 3 to 24 May 2017.

Rashid established his New York-based studio in 1992, after studying design at Carleton University in Ottawa and Rodolfo Bonetto Studio in Milan. His previous beverage-related projects include a set of aluminium bottles for Pepsi and a vessel that filters tap water as the user drinks.

The designer also works on architecture and interiors. Earlier this year he launched an architecture and development firm with architect Alex Hughes, which offers comprehensive property design, from foundations to artwork.

Other re-designed wine bottles include Zaha Hadid's curvaceous container for Austrian winemaker Leo Hillinger and a bottle with scratches across the label. 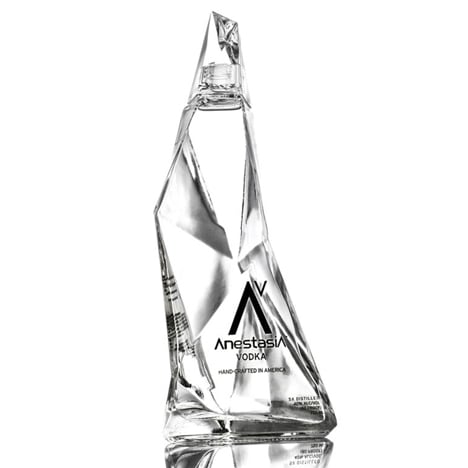