The fallout from the smartwatch trend is a renewed interest in analogue watches according to British designer Samuel Wilkinson, whose second watch collection has just launched on Dezeen Watch Store.

"The recent push for smartwatches has reignited the analogue watch market," said Wilkinson. "The need for quick reference for time is still here, this need will not go away."

Wilkinson – best known as the designer of the Plumen 001 lightbulb – told Dezeen he doesn't understand the need for smartwatches. "We have our phones for all the information and more for our lives, so there is no rush for everyone to get a second screen with more of the same info."

The designer said that, for many people, having a connected watch is a step too far.

"I think, for lots of people, they want to express themselves without having to be surrounded by lots of technology," he said.

After the Apple Watch launched in 2015, Dezeen asked designers what they thought about the smartwatch. Many shared Wilkinson's view.

Yves Behar was among them, stating "I personally don't have one because I don't feel I need another screen in my life."

But simultaneously, there has been an explosion of small, independent design-led watch brands, including Instrumnt, Eone and Squarestreet, which all started after the launch of Dezeen Watch Store in 2010.

Wilkinson worries that the watch market has become "completely saturated". He claims it is more important than ever for new designs to stand out – which is why he has tried to create an unconventional design for his own watch collections with Scottish brand Nomad.

"I think a watch, like a chair, has been overdone and the market is completely saturated so the challenge is harder to find a design with its own signature or unique identity, which I hope I have achieved with Nomad," he said.

Nomad was founded in 2014 by Glasgow-based couple Alan and Kelsey Moore. Wilkinson's first watch for the brand was the Mòltair watch, which referenced the shape of a cast iron pot, while his new collection The Line features minimal dials and irregular markings.

"Most other 'design watches' appear to be designed from a 2D perspective, front on – e.g. the hands, face, dial. With Line, the profile, construction and back of the case is as much the signature as the face," he said.

Watches in The Line series also feature cast stainless-steel casing and organic Swedish leather straps. They are available on Dezeen Watch Store in two styles, Inline and Outline, across a variety of muted colour combinations.

Olivia Mull: Can you describe your most recent watch collection for Nomad?

Samuel Wilkinson: The Line series is my most recent watch collection for Nomad. Following the first collection Mòltair, which was designed as a casual reference to time that used big graphic hands plus a removal of all markings, The Line watches are the opposite.

These are designed as precise tools for measuring time while still trying to retain a bit of a playful edge. Each face features typical numerical, minute and hour markings but rearranged in different compositions to try to find a unique identity. While the Mòltair could be seen as a bold evening fashion statement, Line is positioned as a clean everyday wristwatch that works with casual or formal wear.

Olivia Mull: What influenced the design and materials of The Line collection?

Samuel Wilkinson: I have always been interested in classic Swiss graphic design so this probably influenced the designs. The idea was to graphically produce a clean set of face markings, and then play with the line weights, lengths and where the numbers sat within the lines. We produced a lot of ideas that we liked and found it very difficult to just choose one so ended up with two variations – Inline and Outline.

Olivia Mull: What details set The Line apart from other watches?

Samuel Wilkinson: Most other 'design watches' appear to be designed from a 2D perspective, front on – eg the hands, face, dial. With Line, the profile, construction and back of the case is as much the signature as the face.

From the start it was our intent to produce a piece that would age well and have a solid construction so the Line series has the same cast stainless-steel casing as Mòltair.

The strap is made from organic Swedish leather, which is attached to the casing via a uniquely engineered stainless-steel back plate and fastened with a bespoke clasp. Also inside we have upgraded to Swiss movement to provide superb reliability and accuracy.

Olivia Mull: What drew you to watch design and how does designing watches compare to furniture you have created?

Samuel Wilkinson: Nomad contacted me at the start of 2014 and after speaking with them about their vision for the brand I realised there was a good synergy between us. They gave me total freedom to express my vision which was important. This is my first watch so it was an interesting proposition. I think a watch, like a chair, has been overdone and the market is completely saturated so the challenge is harder to find a design with its own signature or unique identity, which I hope I have achieved with Nomad.

A watch is a different proposition than a piece of furniture but I try to apply the same methodology. The first point is always a deep research stage then I want to understand the context of where a new object may sit within objects with a similar typology. Then you explore to try to find a unique, relevant solution.

I always want details and tolerances to be totally perfect, with some larger objects you have to compromise to produce it at the correct the price. A watch is a bit different as you are working in micro tolerances, so the control is great and with a good grasp of the possible manufacturing processes, plus a bit patience, you can get as close as possible to achieving a perfect outcome. We hope to have produced a watch of high build quality that could have been sold for a lot higher price.

I think the recent push for smartwatches has actually reignited the analogue watch market. The need for quick reference for time is still here, this need will not go away. I think for lots of people they want to express themselves without having to be surrounded by lots of technology. We have our phones for all the information and more for our lives so at present there is no rush for everyone to get a second screen with more of the same info. A watch has always been more than just a timepiece, it is the perfect way to express your individuality.

A watch has always been more than just a timepiece, it is the perfect way to express your individuality

Olivia Mull: What is the biggest challenge when designing watches?

Samuel Wilkinson: Being a little naive to an industry can help to really push details through that may be an experienced designer would not normally challenge. For example, when we asked for a heavy sand-cast texture on the case, the supplier came back and said 'we can't do that!' and we were like, 'can you try?' Then after a bit of to and fro they try it and it works.

Olivia Mull: The Line collection was launched on Kickstarter. Can you tell me why Nomad took this route?

Samuel Wilkinson: I think the ecosystem of producing and selling objects is changing. I think before there was a bit of stigma attached launching products via Kickstarter but now, for the right type object, it can be a perfect place to launch a new product, especially smaller or innovation-led products. It allows the company to not waste time guessing which skew or colour way will be liked more than another.

It also tells a company to drop a product if there is now desire for it so it allows more flexibility for a younger company to find their feet. It's daunting as a designer as you never want anything to fail. Luckily we were over 200 per cent funded with only a small amount of publicity so it worked out well.

Olivia Mull: Finally, what watch do you wear and is it one of your own designs?

Samuel Wilkinson: Admittedly I didn't wear a watch before working on these but now I swap between a black Inline with a natural strap, a white Outline with a black strap, or Mòltair Steel. 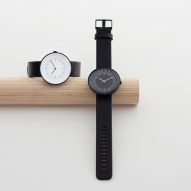