New images have been released of Shigeru Ban's Terrace House, a 19-storey residential tower for Vancouver that will boast a pioneering hybrid structure of wood, concrete and steel.

Designed for the Vancouver waterfront, the Japanese architect first unveiled plans for Terrace House last year. The initial visual showed a mono-pitched timber-framed structure clad in glass that was to be supported by a concrete and steel core – although no details of height were given at the time.

According to a recent article by the Vancouver Sun, the 19-storey tower will reach 71 metres high at its tip, making it the world's tallest hybrid timber structure.

The title is currently held by the 18-storey, 53-metre-high Brock Commons at the University of British Columbia, which is made up of steel, concrete and timber, and also located in Vancouver.

"The goal of this innovative wood, glass, and concrete tower is to make a prominent gesture that demonstrates Vancouver's commitment to forward-thinking sustainable design and advanced timber engineering and construction," they continued.

Terrace House is the latest development in timber construction, as architects increasingly turn towards wood as a building material for its sustainability, quality and speed of construction.

Last year, PLP Architecture and researchers from the University of Cambridge revealed a concept for London's first wooden skyscraper, while French architect Jean Paul Viguier has proposed a trio of timber-framed towers for Bordeaux.

Along with news of the height, the developers have released new renderings of the tower, which is set to be Shigeru Ban's tallest project, as well as his building first in Canada.

The images show how the architect has detailed the lower half with terraces to line up with the listed landmark next door – the Evergreen Building by Canadian architect Arthur Erickson.

The concrete office building, completed by Erickson in 1978, is fronted by stepped floors with zigzagging concrete roofs that are brimming with planting.

Similarly, the terraces of Ban's building will also overflow with greenery, staggering outwards on one side to form a mirror image of the older structure.

The opportunity to respond to the building is what apparently attracted Ban to the project in the first place.

"Shigeru Ban has tremendous respect for Arthur Erickson's work," said his studio. "It was the opportunity to design a building next to one of Erickson's masterpieces that initially drew him to this innovative project."

In order to ensure continuity between the two structures, the developers have enlisted the landscape architect of the Evergreen Building – Cornelia Oberlander, who is now 95 and based in Vancouver.

"Every detail has been considered right down to the specific foliage on the terraces," said founder of PortLiving, Macario Reyes.

This is not the first time that Ban, who came 50th in the Dezeen Hot List, has experimented with wooden construction. Last year, he completed his first building in Switzerland and the building's most notable feature is its exposed structural system made entirely of timber. 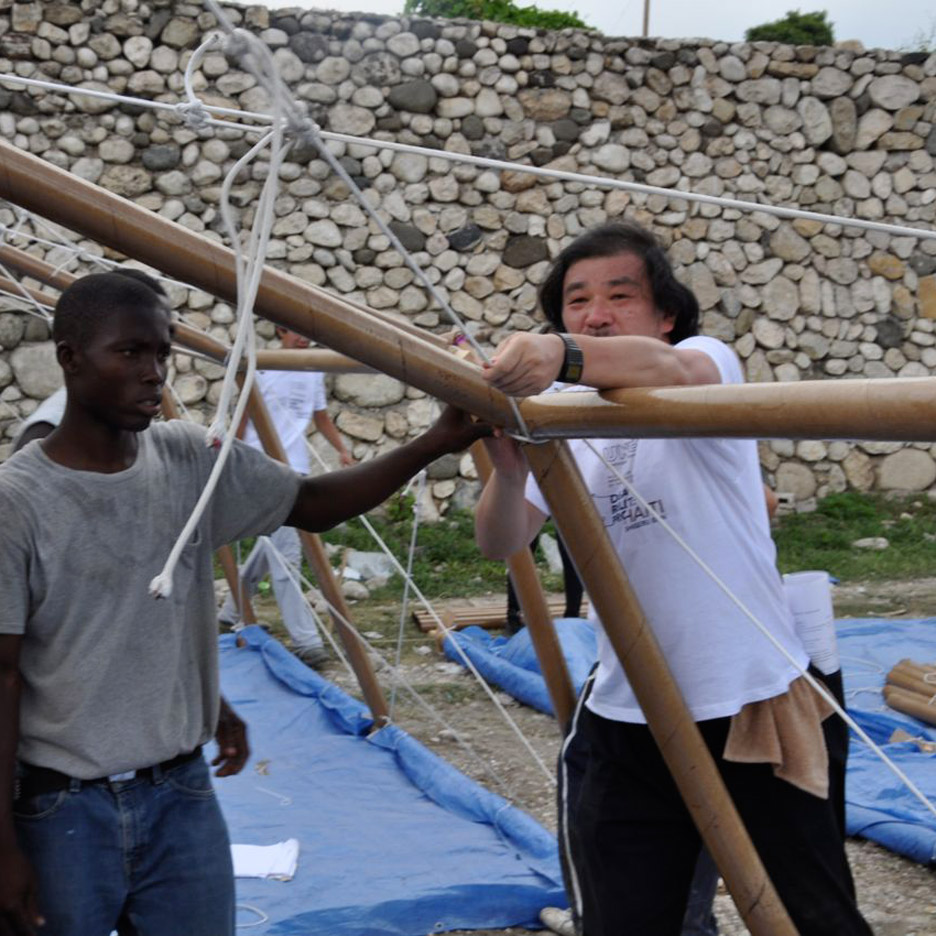 The architect, who won the prestigious Pritzker Prize in 2014, is also renowned for his humanitarian work and has previously designed a series of shelters following natural disasters and a temporary cathedral for in Christchurch following an earthquake.