This week on Dezeen, IKEA rivalled Tesla with the launch of solar battery packs, while the electric car company unveiled its first mass-market electric vehicle.

IKEA is to save customers money on their energy bills by introducing battery-storage for solar panels, which would work in much the same way as Tesla's Powerwall batteries.

But it was also a good week for Elon Musk's company, which finally launched its most affordable electric vehicle to date.

In other news, a blaze broke out at one of Dubai's tallest skyscrapers for the second time and a review into fire safety was launched in the wake of the Grenfell Tower tragedy.

Also, American studio wHY won a competition to design a new events pavilion for Edinburgh and  guests at New York's Public hotel made headlines for having sex in full view of their neighbours.

In the world of technology, Gravity Sketch made its virtual reality 3D-drawing tool available to the public and Brompton launched the first battery-powered version of its folding bike.

The world's first autonomous container ship announced a maiden voyage in 2018 and the high-speed Hyperloop One reached 190 miles per hour in its first full system test.

Also this week, Snarkitecture revealed an immersive installation for fashion brand COS and rumours emerged regarding the new iPhone's design.

And, in a video interview with Dezeen, MAD's Ma Yansong said Chinese cities should draw more from the country's traditional architecture, rather than copying the style of western buildings. 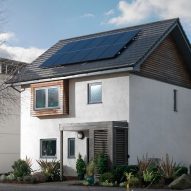