Inspired by a resurgence of interest in dystopian literature and Trump's online activity, King used an online archive to navigate through more than 30,000 of the US president's tweets, before placing them amongst Orwell's text.

She began by pasting the selection of quotes into InDesign. Words from the novel were coloured red and positioned vertically down the page, while the tweets were laid out horizontally.

"The project creates a juxtaposition between Donald Trump's tweets and the narrative of Nineteen Eighty-Four to suggest the parallels between the themes of the book and Trump's rise to power," King told Dezeen.

"Any words that Trump hasn't tweeted are included alone, and they're usually the more florid, descriptive words, or the neologisms unique to the novel such as 'Ingsoc', 'doublethink' or 'thoughtcrime'," she continued.

For the font, King chose Sabon – a serif typeface commonly used for body text in books.

"Using a serif font helps to re-contextualise the tweets away from their digital origins on Twitter, where they would be seen in a sans serif," she said.

"By setting the tweets in Sabon, as a traditional book would be, it treats them with the same sense of authority and legitimacy as a publishing manuscript, and provides a link to the literary nature of the constructed text, the narrative of Nineteen Eighty-Four," she continued.

Originally, the designer wanted to exhibit the project as a fifteen-metre scroll, hinting at both ancient reading methods and the present-day scrolling of webpages.

But having witnessed a growing interest in dystopian novels, perhaps in light of the presidential election and through TV shows like The Handmaid's Tale, she changed the project's format to a 150-page A3 book that is hardback and horizontally bound.

King embarked on the "1984 by @realdonaldtrump" project during her final year at London's Central Saint Martins university – citing an interest in the "role of written language".

"I was interested in the role that written language and the ways in which it is published and shared had to play in the blurring between fact and fiction in our increasingly online culture," she said. 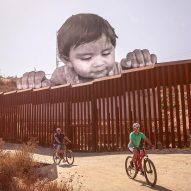 Trump's rise from property mogul to Republican candidate and eventual president of the United States has prompted a constant stream of responses from designers and architects, including a Nazi-style logo and an IKEA version of his proposed Mexican border wall.